Energy use rises in shops and offices as economy reopens 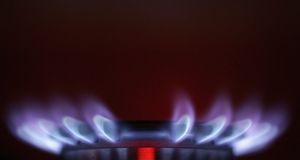 The Savills-Pinergy Energy Monitor shows energy consumption in offices rebounded from 53 per cent of 2019 use from March-May to 74 per cent in June. Photograph: Christopher Furlong/ Getty

A monitor compiled by supplier Pinergy and property dealer Savills shows that retailers used 43 per cent less energy between March and May this year than during the same period in 2019.

However, last month, consumption rose to 86 per cent of the levels seen in June 2019 as shops began reopening following months of Government-enforced closure.

Energy consumption in offices rebounded from 53 per cent of 2019 use from March through to May to 74 per cent in June, the Savills-Pinergy Energy Monitor shows.

Savills and Pinergy believe this is unlikely to increase further as large numbers of office workers continue to operate from home while rules requiring that people maintain a 2 metre distance from each other remain in force.

Energy consumption in agriculture was at 97 per cent of 2019 levels in June as food production is an essential industry.

“However, social distancing restrictions will continue to impact on some commercial properties like offices, leading to lower levels of energy consumption than we saw in 2019,” he said.