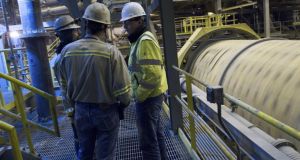 Turnover at mining and exploration company Kenmare Resources increase to $234 million in 2012, from $167 million the previous year, according to preliminary results for last year.

Profit after tax was $49.5 million, up from $23.7 million the previous year. The company also announced the appointment of Steven McTiernan and Gabriel Smith as non-executive directors.

Kenmare operates the Moma Titanium Minerals Mine in Mozambique, which it said was now in the commissioning stage.

Chairman Justin Loasby said the company had been developing and building its assets at Moma until now.

“With the 50 per cent expansion coming on stream, we are now at the point where we can concentrate on operating the assets to achieve a sustainable return on the investment which has gone into their development.”

Catholic Church records may be inspected over GDPR concerns