Plugging in to success again at energy group PrePayPower 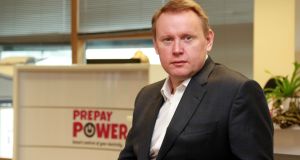 To build up one thriving business, practically from scratch, takes a lorry load of effort and no shortage of luck.

To do it all over again takes even greater effort, although luck is clearly less of a factor the second time round. But to do it three times in just 15 years? Well – in Ireland, at least – that’s considered showing off.

Andrew Collins, a media-shy Dubliner, is a proper serial entrepreneur, unlike some who have hijacked the term.

He helped build and then sell accommodation site Needahotel. com, followed by online insurer 123.ie, in a pair of high-profile deals either side of the crash. Combined, they sold for at least €100 million, and Collins owned a third of each.

Now he is working on his hat-trick, as group chief executive of fast-growing pay- as-you-go electricity provider, PrePayPower (PPP), which last year doubled its revenues to almost €80 million.

Once again, he owns about a third of the business, alongside other investors such as Ulric Kenny of Ion Equity. PPP is not for sale. But it is on the march.

Collins – sharp suit, relaxed, mannerly – was once a salesman, and it shows. Before sitting down to talk through the company’s plans, he delivers a polished spiel on how PPP’s service works. An electricity meter has been pre-delivered to his office for use as a prop. He has never given a newspaper interview before, but he appears suspiciously well prepared for his debut.

“I don’t normally have this thing in here,” he says, nodding to the meter. “But I figured I’d be better off showing you how it all works, instead of just telling you.”

PPP launched services in 2011, and Collins joined the business a year later. Here’s the gist of his pitch . . .

Let’s say you’re sick of big electricity bills landing with a thud on your doormat every two months. You want control, says Collins, so you decide you want to pay as you go, like many people do with their mobile phones.

PPP isn’t the only one of Ireland’s seven residential power suppliers to offer pay-as- you-go meters, but it is by far the largest operator in this segment of the market, with more than 100,000 residential accounts. Rivals include Pinergy, while the mainstream suppliers also do pay-as-you-go.

If you choose to go to with PPP, you call it up or enter your details on its website. Within 72 hours, its contractor installs a unit in the box that houses your electricity meter, while a separate, smaller control panel is installed in a convenient location, such as in the kitchen or under the stairs.

The control panel is used to top up the account via vouchers purchased from retailers, and also to monitor electricity consumption. Customers can also top up their account using PPP’s smartphone app.

And that’s basically it, Collins says. It sounds relatively simple, but that’s what salesmen always make their targets believe.

“Our customers don’t get into debt. They get to control and therefore reduce their usage. And if they run out of credit, we don’t cut them off in the evenings or at the weekend. There’s that small bit of flexibility in the system.”

Critics of prepaid electricity say it isn’t the cheapest way to power a home. Collins claims PPP has the “lowest standard unit price” in the market, although he does not say it is the cheapest provider of electricity to customers.

If he did, one of his rivals would probably beg to differ. PPP has been rapped before for its advertising claims on price, and the market is highly competitive. Electric Ireland, for example, recently announced a 2 per cent price cut, while Bord Gáis Energy is also hungry for business under Centrica’s ownership.

There is no upfront cost to customers for PPP’s meter, but there are service charges and public levies of about 57 cent a day. Collins claims the average customer reduces consumption by 9 per cent, while a quarter reduce it by at least a fifth. On that basis, the company also claims to be green.

His media reticence may also be down to the identity of his wife, who the gossip-hungry UK tabloids have reported is Luisa Zimmerman, UK-based former star of the Apprentice and Celebrity Big Brother. He won’t comment at all.

Collins’s route to millionaire status seems remarkably ordinary, the way he tells it. The son of a hairdresser mother and an entrepreneurial father, he grew up in north Dublin. He studied commerce in Rathmines during the day, while taking his chartered accountancy exams by night.

In a move that would have pleased his mother, his first job was as a cost accountant for the Revlon hair products company. After a stint as a bean counter with a pharmaceutical equipment supplier, he then took a job selling software to other accountants.

“That took me into the commercial world. My father was the biggest influence on me when it came to business. He also encouraged me to get some equity, to take a bit of risk.”

After a period in computer sales and training, where he worked for the likes of Maurice Healy, Paschal Taggart and John Nagle, he found himself at the age of 29 running a technology division of 140 people for a listed company.

It was around the turn of the millennium, and Collins felt he had reached a crossroads in his career. Heeding his father’s advice to “take some risk”, he looked for an investment opportunity.

“Someone told me about this English lady called Sarah Newman. She was building a business that sold hotel rooms to travel agents, and had agreed a contract with Ryanair.

“In January 2000, they were launching this thing called a website, and I was asked if I’d go and meet her.”

Collins met Newman in a Dublin hotel, advised her on structuring her growing business and said she’d have to look for a manager and an investor. She asked him where she might find those. Collins replied she was looking at them.

“I invited myself in, although Sarah got a proper deal done up through a corporate financier. That took a few months, and I joined the business in June.”

Newman knew the hotel industry, while he was familiar with call centres, technology and business management. They “worked wonderfully” together before selling out to a multinational for a reported €60 million in 2006.

Collins says the Needahotel deal size was “wildly inflated” in the media. He won’t exactly say how much, but doesn’t flinch when asked if it was half of what was reported.

At midday on the day that deal was reported in the newspapers, Collins was already talking to a potential investor about his next venture. Insurance broker Derek Richardson had previously rented office space to Needahotel. Now, he had an online business, 123.ie, and he wanted Collins to join as managing director to help grow it.

Collins had no experience of the insurance industry, “but once the website traffic came in, I knew how to convert them. I also knew the correlation between a website and a call centre. Derek filled me in on the insurance bit”.

In 2010, RSA announced it would buy the business for more than €80 million. Collins’s roughly one-third share was clearly his biggest payday to date. For his part, Richardson has since gone on to buy London Wasps rugby club.

He and Richardson retained 123’s life business, which they still operate as Hello.ie, while in 2010, Collins also invested in Click,cz, a Czech online insurer.

“I really like that business. It has a really bright future. But my main business, now, in terms of my time, is PPP. I’m more excited by this than I have ever been about any other I’ve been involved in.”

By a quirk of coincidence, 123 had previously occupied the same office in Sandyford that is currently home to PPP.

In 2011, then chief executive Cathal Fay, who still runs PPP on a day-to-day basis, approached Ulric Kenny looking for investment. A pitch was also made to Collins when he was still at 123, in the very same office he occupies today for PPP. RSA allowed him spend some time with the upstart power provider, and he joined PPP practically full-time in December 2012.

“Between Ulric and I, we invested millions of our own cash into the business. We agreed we wouldn’t ask any other investors to come in until the business was profitable. We had 20,000 accounts before we asked anyone for cash – debt or equity – and we had proved the concept.”

On the back of a major sales and marketing drive, as well as a recession thrift-inspired land grab in the prepaid power market, PPP has now broken the 100,000 customer mark. Collins denies that its target demographic is people who can’t manage their money, although the dark days just after the crash did help to cement the idea of prepaid power in the public’s minds.

“The recession probably helped kickstart the idea, but customer referral is what makes the business grow. I know it sounds schmaltzy, but word-of-mouth and referrals really work.”

Its accounts for 2014, which were provided to The Irish Times, show sales last year rose from €39.8 million to €78.5 million, while it made a profit of €2.5 million. There is €7 million of cash on the balance sheet and long-term debts of about €16 million.

“We’re a regulated utility, and we have to act like one when it comes to our balance sheet. We won’t be doubling our turnover in 2015 or anything like that. But it will still be double-digit in percentage terms.

“We are aiming for strong, steady growth as the market gets bigger. And we think we have a way to go yet.”

Michael Cawley, the former deputy chief executive of Ryanair who Collins knows from his Needahotel days, has joined the board and invested in the business. Other investors are reported to include Feargal Quinn. Falcon Oil boss Philip O’Quigley also holds a stake.

Collins acknowledges that his track record might suggest he will eventually sell up and move on to something else. But not for a few years yet, he insists.

From computers to hotel rooms to insurance, and now energy. There isn’t much of a sectoral pattern. What is Collins’s business philosophy?

“In business, having a good idea is essential. But I think execution is actually what is key. It’s a mantra. How you execute your idea – whatever it is – is the most important thing,” said Collins. “There’s no point banging your drum about your big idea to customers if they’re all walking out the back door because they’re not happy with the service or the price.”

Business is quite simple, really. For some people. CV Name: Andrew Collins Position: group chief executive PrePayPower Age: 45 Home: From next year, the UK, because I have bought a house there. Family: Partner and one child. Something about him that we would expect: “I love my Blackberry.” Something about him that would surprise: “I’m a big GAA fan, and I played for Fingallians in Swords. I once marked Jim Gavin (the Dublin manager) in a match.”