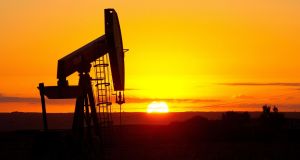 Oil rose 3 per cent yesterday as short-covering and technical support halted its slide to 11-year lows, but traders said the market remained fundamentally weak from oversupply.

Brent and United States crude’s West Texas Intermediate (WTI) futures rose more than $1 a barrel, up for the second straight day after oil bears failed to push prices below a seven-year trough.

“People are buying on the dips,” said Jeffrey Grossman, crude dealer at New York’s BRG Brokerage, who expects Brent to return closer to the $40-a-barrel level it fell under last week.

On Monday, it came within 14 cents of snapping its December 2008 bottom of $36.20, unleashing a surge of buying support at those low levels.

Oil’s rebound was restrained somewhat by a firm dollar ahead of expectations that the Federal Reserve will today announce the first rate hike in almost a decade.

“We are seeing nothing unusual about this week’s price bounce given the fact that the entire complex had become much oversold based on virtually all of our technical indicators,” he said.

Analyst Chris Jarvis of Caprock Risk Management in Frederick, Maryland, concurred. “Everyone was looking at 11-year lows, but I think people got a sense of ‘bids’ when they tried probing there,” Mr Jarvis said.

“But I’d be surprised if they don’t come back and take it down.”

Danske Bank said crude could hit $25 before output declines push prices back up.

How to budget your way through financial realities of Covid-19 06:39
Restaurants seek rent help, QIH lays off 600 staff, and podcasts playing a blinder 06:30
Will pandemic payment give me PRSI stamp as retirement looms? 05:50
Stocktake: In numbers 05:40
Listen up: Podcasts adapt to thrive in self-isolation 05:38