Market contagion hits oil hard with Brent crude falling down $2.47 to $48.44 a barrel 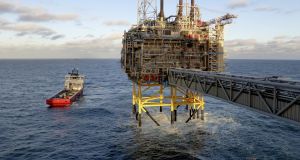 Oil prices slumped by more than 6 per cent on Friday after Britain voted to leave the European Union, raising fears of a broader economic slowdown that could reduce demand.

Financial markets have been worried for months about what Brexit, or a British exit from the European Union, would mean for Europe’s future, but were clearly not fully factoring in the risk of a leave vote.

Earlier in the day, both contracts were down by more than $3, or over 6 per cent, the biggest intra-day declines for both since April 18th, when a meeting of top global oil producers failed to agree on an output freeze. Sterling sank 10 per cent in value to its weakest since the mid-1980s.

The FTSE 100 fell more than 8 per cent at the open, with banks among the hardest hit, but by midday had recovered some ground to stand 4.3 per cent lower.

“The global uncertainly that (the vote) is likely to unleash is likely to have a potentially negative effect on GDP growth, not only in the UK, but potentially in Europe,” said Michael Hewson, chief market analyst CMC markets.

“Obviously we don’t know that yet, but certainly in the context of where we were 24 hours ago, the knee-jerk reaction is to sell on the reality,” he added.

“Our view is that we have not yet seen the low oil price of the day with Brent likely to trade down towards $45 or lower before we have seen the worst of it,” Bjarne Schieldrop, chief commodity analyst at SEB, said in note to clients.

“Higher risk aversion is likely to make it hard for prices to regain the $50 per barrel mark in anything like the near future,” said Commerzbank analyst Carsten Fritsch.

BP said on Friday its headquarters would remain in the United Kingdom, despite the vote.

The vote to break with Europe is set to usher in deep uncertainty over trade and investments.

“Any further downturn in the economy or volatility in the oil price could cause further distress in the sector and in particular further project....deferrals might have significant consequence for the service sector who also rely on mobility of employees around the world,” PwC UK and EMEA oil and gas leader Alison Baker said.