Ocean observatory due to be located in Galway Bay 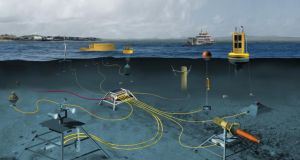 Impression of the sub-sea observatory at the Galway Bay test site, connected back to shore by a cable which has already been installed. Photograph: SmartBay

A sub-sea observatory is due to be installed in Galway Bay when weather permits, as part of a significant development of the State’s ocean energy testing capability.

The observatory will be able to provide marine technology and ocean energy developers with “real time” data on how their devices are performing.

A cable to feed power to the site and receive data has been laid from Spiddal, Co Galway, by the State’s research ship RV Celtic Explorer.

The project is being spearheaded by the Marine Institute and the Sustainable Energy Authority of Ireland (SEAI) with partners SmartBay Ltd, University College Cork’s Marine Renewable Energy Ireland (MaREI), and Dublin City University.

SmartBay Ireland Ltd general manager John Breslin said the Spiddal location allows for less exposed trials of smaller scale ocean energy devices, and those at an earlier stage of development. The observatory installation will transform the location into a world-class ocean energy test site, he says.

The equipment will have 23 ports, 15 of which will be dedicated to the testing of new sensors. Four of the 23 ports will be optical, 18 electrical and there will be one coaxial port for high definition camera and lights.

The cable project is funded in part by Science Foundation Ireland (SFI) under its 2012 research infrastructure call which contributed €2.2 million.

Department of CommunicationsEnergy and Natural Resources

Government support for ocean research, development and demonstration has been increasing, Minister for Energy Alex White has said, with €16.8 million added to his department’s multi-annual ocean energy development budget between 2013 and 2016, bringing the total cumulative funding to more than €26 million.

In a related development, two public consultation documents published by Mr White last week seek views on the renewable energy technologies that currently receive financial support from the State, and whether the Government should broaden the range of technologies it supports.

The 2009 EU Renewable Energy Directive set Ireland a legally binding target of meeting 16 per cent of its energy requirements from renewable sources by 2020.