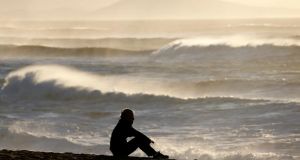 The budget for ocean energy development in the 2013-2016 period will be increased by €16.8 million. Photograph: Guillaume Horcajuelo/EPA

Ocean energy will receive a boost in funding from the Government under a new plan to develop wave and tidal resources in Ireland.

The Offshore Renewable Energy Development Plan proposes the introduction of an initial market support scheme for wave and tidal energy from 2016, while a new steering group will be established to implement Government targets for the industry.

The budget for ocean energy development in the 2013-2016 period will be increased by €16.8 million, bringing total cumulative funding to €26.3 million. The money will pay for activities at various ocean energy test sites on the west coast, research projects by the Cork-based Integrated Maritime Energy Resource Cluster and also the development of prototype devices for the conversion of wave energy into electricity.

The plan, which has been several years in development, outlines how so-called “blue energy” derived from a sea area of 900,000 square kilometres will create jobs in Irish coastal communities. It identifies potential marine renewable resources of more than 70GW of energy in Irish waters, which is more than 14 times Ireland’s current energy demand.

Minister for the Marine Simon Coveney will chair the Offshore Renewable Energy Steering Group, which will also include representatives of the Marine Institute, the Environmental Protection Agency and the Sustainable Energy Authority of Ireland, alongside other industry bodies and government departments.

“The potential of the offshore renewable energy sector to be a source of sustainable employment and growth in the green economy has been consistently identified in Government economic planning and job creation strategies, and by the European Commission in its recent communication on ‘Blue Energy’,” Mr Rabbitte said.

Peter Coyle, the chairman of the Marine Renewables Industry Association, said the plan was “well worth the wait” and that the industry supports announced were “modest but suitable”.

The National Offshore Wind Association of Ireland (Now Ireland) also welcomed the launch of the plan, hailing it as “an important milestone” for the industry.

“Ireland is unlikely to secure turbine manufacturing plants, but the success of Belfast Port in attracting investment from the likes of Dong Energy and Siemens as well as Harland and Wolff, shows that we can compete for a multi-billion euro share of the supply chain.”