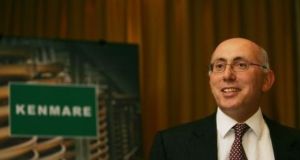 Shares in Kenmare Resources fell almost 5 per cent on Tuesday morning after the Dublin-headquartered miner declared its maiden dividend but flagged a 21 per cent drop in pretax profit to $22.8 million (€20.5 million).

Kenmare, which restated full-year guidance for 2019, said it would pay $0.0266 per share to shareholders, the largest of which is Oman’s sovereign wealth fund. Shares fell in London and Dublin, albeit on light volume.

The miner, which produces around 7 per cent of global demand for titanium dioxide, has one asset on the north-east coast of Mozambique, the Moma Titanium Minerals Mine. The asset has a life span of about 100 years.

Kenmare has, this year, suffered on the back of adverse weather although Michael Carvill, the company’s managing director, told The Irish Times that its shipping capacity will have caught up with its production capacity by the end of this year.

In its half-year results, Kenmare said those lower shipping volumes caused a 12 per cent fall in revenue to $122.7 million. The decline in shipments was offset partially by a price rise of 7 per cent while revenues in the second half are expected to improve.

From its Mozambique mine, Kenmare produces titanium minerals such as Ilmenite and Rutile which are used to produce titanium dioxide pigment. This, in turn, is used to manufacture paints, plastics, paper, cosmetics, food additives, ceramics and textiles.

The company is in the middle of a capital expenditure programme to upgrade its facilities with the objective of increasing production to 1.2 million tonnes per year of ilmenite from 2021 with an improved margin. With that work ongoing, Mr Carvill explained that the group has no plan to evaluate new prospects.

Asked about global economic concerns, given Germany’s slowdown and the ongoing US-China trade war, Mr Carvill said that as long as there is not a “devastating recession” people will still use titanium pigment.

Kenmare said its excavated ore volumes in the six months to June 30th set a new record for the company, putting it on track to meet its full-year guidance.