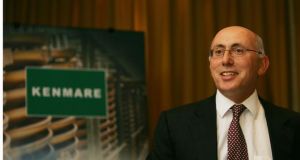 Irish mining company Kenmare Resources has reported an operating loss of $17.9 million for the six months to June-end, down significantly from the $6.9 million profit it posted during the same period last year.

Earnings before interest, taxation, depreciation and amortisation (EBITDA) were $2.3 million for the six month period, compared with $18.9 million in 2013.

The company said management has been conducting an in-depth review of operating costs and has instigated a cost reduction programme. This has realised an absolute cost reduction in the first half of 2014. Together with higher production volumes, this has contributed to a 14 per cent decline in operating costs per tonne of final products produced in the first half of 2014, compared to 2013.

“A significant proportion of global production is struggling to cover cash operating costs, before debt service or return on capital: this is an unsustainable situation.”

He said the company expect results for the full year to benefit from a more favourable sales mix, increased volumes and targeted cost reductions.

1 Farmer seeks to challenge €3.6bn Intel plan in High Court
2 Council tells Johnny Ronan firm to keep the noise down at D4 Embassy venue
3 Intel shares jump 7% on strong earnings and revenue forecasts
4 If you have any assets overseas you need to read this
5 Ryanair wants Irish courts to block Skyscanner from selling its flights
6 Ireland paid over €60bn interest on national debt in 10 years
7 The ‘quacking ducks’ Denis O’Brien stuffed with Digicel debt wait in the reeds
8 Cairn Homes gets permission for 426 homes near Greystones
9 Ireland’s top tech companies: who pays the most?
Real news has value SUBSCRIBE