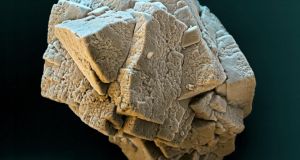 Metal Organic Frameworks. What do those three words together conjure up in your mind?

If you’re not a science graduate, perhaps the 1980s cartoon Jayce and the Wheeled Warriors is what you’re thinking – where strange half organic, half inorganic machines (the Monster Machines) battled it out with Jayce and his Lightning League.

Or if you’re actually au fait with modern chemistry you may be thinking of something far less juvenile.

MOFs are an example of crystal engineering, a new “paradigm for materials design” which is being carried out at the University of Limerick (UL) and elsewhere in Irish labs.

“Those involved are designing materials from scratch rather than randomly trying to discover new materials,” says Mike Zaworotko, Bernal chair of crystal engineering and research professor at the UL department of chemical and environmental science.

“Shake and Bake is a term used to describe how to traditionally make a material. Crystal engineering takes a different approach. You start with a molecule and build a material around it, quite like an architect. Nothing is left to chance, and nothing is done randomly.

“Once you successfully learn how to design materials you can control the structure and properties of that material and fine-tune them rather than letting nature decide what it wants to do.

“Through the phenomenon of self-assembly, we can now design materials with atomic precision, materials that may revolutionise practically every technology on earth.”

This is where it all gets a little counter-intuitive but essentially, with the help of certain MOFs, you can have a solid providing more empty space for materials than if the solid were not there to begin with.

“It can be conceptually difficult to get one’s head around this but something solid which is so full of holes can actually provide more space than if it wasn’t there. Hundreds of thousands times more space in fact.”

In some cases up to 80 per cent of an MOF can be void. The easiest way of thinking about them, therefore, is like very highly concentrated little sponges.

“One gram of MOF surface area would be the equivalent of up to 40 tennis courts,” says Dr Paschal McCloskey, chief executive of MOF Technologies, based in Belfast.

“If that analogy doesn’t work, try a quarter teaspoon filling a rugby pitch.”

This is not new. An estimated 20 per cent of all industrial vehicles already run on natural gas (mainly in the US, southeast Asia and Australia), but MOFs offer much greater efficiency.

The largest chemical company in the world, BASF, owns the IP to the solvo-thermal process central to MOF manufacture.

They have a commercial relationship with Ford Motors to develop MOFs for natural gas storage and do not sell any significant quantities of MOFs commercially anywhere else. As no one else can produce MOFs on any major scale, this has significantly limited the supply of MOFs which could suggest the delayed development of this technology.

“Still the relationship between these two companies will lead to a commercial vehicle powered by MOF natural gas/methane for sale in the next 18-24 months,” says McCloskey.

Quantity has always been a problem but he and his team are now able to manufacture kilograms and are moving up to 100kg quantities. In order to circumnavigate BASF’s monopoly on all things MOF-related, MOF Technologies do things differently. “BASF own the IP for the solvo-thermal process,” says McCloskey. “Our technologies are solvent free.”

They have plenty of customers, including General Motors. “We have sold significant quantities of our materials to GM so that they can evaluate our MOFs for use with their own prototype natural gas engine.”

Natural gas-powered engines are the headline material for MOFs but they have many other practical industrial applications.

“The materials allow you to store a greater amount of gas in a smaller space but also at a lower amount of pressure. That’s useful in lots of ways. But they also have another really big application – in heat transformation processes.” This relates to improving efficiencies around refrigeration and temperature control.

“Most computer data centres’ current heat pumps use a silica gel. Their performance isn’t very robust. An MOF-based solution is superior. We are currently in collaboration with one of the world’s largest computer companies about next stage climate control for cloud computers.”

Waste not want not

“We are trying to use these MOFs for CO2 storage and ideally conversion into fuel,” says Wolfgang Schmitt of the school of chemistry in Trinity College Dublin.

“This involves trying to replicate the natural photosynthesis process. So rather than seeing CO2 just as a greenhouse gas, we see it as feedstock of carbon and oxygen, and potentially a starting material for fuels. We are turning a potential waste product into something valuable.”

If Schmitt and his research group can achieve this, we’ll all be saved.