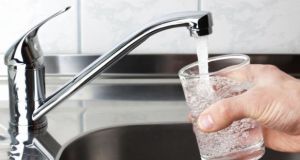 Irish Water said it made a total capital investment of €548 million last year, which included over 300 water upgrade projects and work on the controversial meter installation programme

Gas Networks Ireland (GNI), which is owned by Irish Water’s parent Ervia, plans to tap bond markets towards the end of this year to raise €500 million.

The cash will be used to refinance a bond due in 2017, while the company has also recently refinanced a €450 million credit facility at lower rates.

Michael O’Sullivan, the chief financial officer of Ervia, said GNI probabaly seek to issue a five-year bond. “The market is attractive at the moment,” he said.

Michael McNicholas, the Ervia chief executive who presented the group’s financial results yesterday, also said he would review the future of its Aurora telecoms and fibre business later this year.

“We’re very happy with the way it is performing, but we’ll have a look at it later this year and decide whether to invest further, or what to do with it,” he said.

The group, which paid a dividend to the State last year of €189 million, also expects to sit down with the government at some stage soon to decide on how to allocate its future earnings between investment and dividends.

Ervia’s gas business recorded a 2014 profit before tax of €137 million last year, down 14 per cent on 2013. Its Irish Water subsidiary, whose results were not consolidated into Ervia’s, made a loss before tax of €139 million.

Irish Water reported revenue of €687 million for 2014, financed by commercial water charges and a subventiuon from the State. It will be financed purely from charges for 2015.

Last week, the utility announced that 46 per cent of households had paid their water charge bills for the first three months of the year. The company said any shortfall as a result of non-payment of charges would be covered by liquidity provided by the government.

Mr McNicholas said he expects Irish Water’s non-payment rates to be aligned with those of other utilities in the long term. In a statement accompanying the company’s results, the chairwoman Rose Hynes admitted it had failed to win over water customers.

Irish Water said it made a total capital investment of €548 million last year, which included over 300 water upgrade projects and work on the controversial meter installation programme. It also raised €400 million in funding, with a further €350 million agreed with banks in the first quarter of 2015.

Mr McNicholas said he expects water charges to be an “issue for debate” during the next general election, which is tipped for the spring. He repeated an assertion he made at this week’s MacGill summer school that the comopany would require more political and public support if it is to fulfil its mandate.

When asked if he feared Irish Water would become a political football during the campaign, he replied: “The reality is that we have been a matter for political debate in this country since Irish Water was founded.”