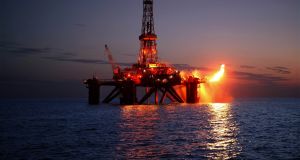 A gas exploration rig. Shares in Dublin-based exploration Falcon Oil & Gas jumped by as much as 21 per cent on Wednesday

Shares in Dublin-based exploration Falcon Oil & Gas jumped by more than 60 per cent on Wednesday after it said that drilling results from the Beetaloo Basin project in Australia’s Northern Territory indicated a “material” gas resource at the site.

Falcon said a joint venture partner on the project, Sydney-based Origin Energy Resources, has estimated that a gas discovery, declared last October, on the so-called Middle Velkerra B shale reservoir contains a gross 496 trillion cubic feet of gas in place.

Shares in Falcon, which is led by chief executive Philip O’Quigley, a former finance director at Providence Resources, were up from 5.25p on Tuesday to close at 8.5p in London on Wednesday.

“While the [Origin] report is caveated to reflect the early stage of the work underway and the limited data set relative to the scale of the area, this is a very significant number,” said Job Langbroek, an analyst with Davy in Dublin.

For context, the Corrib field off the west coast of Ireland, where gas flow started in late 2015, contains an estimated 1 trillion cubic feet of gas. It is forecast to meet up to 60 per cent of the country’s gas needs at peak production, as it remains in operation for 20 years.

Falcon owns 29.4 per cent of the Australian project, having sold a 70 per cent stake to partners Origin and South Africa-based Sasol in 2014 in exchange for them carrying the Irish company through $200 million of capital expenditure on the project, which gives them rights to explore an area the size of Wales.

However, Mr Lanbroek said that upside for Falcon’s shares will be limited by factors including the Northern Territory (NT) government introducing a moratorium last September on hydraulic fracturing. Since then, an independent panel has been established to report back to the government. An interim report is expected to be published by the middle of this year and a final one by December 31st.

Falcon said the gas discovery report in October and Origin’s newly-published contingent resource estimate “will hopefully provide insight into the potential positive impact this unconventional resource may have on the economy of the NT and on Australia”.