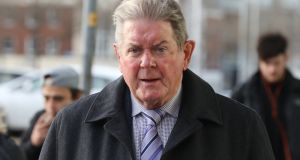 Donal Kinsella at the Four Courts yesterday. He has been paid €500,000, plus €200,000 in costs, but a stay applies on payment of the remaining sum pending the appeal outcome. Photograph: Collins Courts

The Court of Appeal will rule later on an appeal by Kenmare Resources over a €10 million libel award, the highest in the history of the State, to its former deputy chairman Donal Kinsella over a press release issued by the company.

The finding of defamation of Mr Kinsella, and particularly the size of the award, has done “a great injustice” to the company, Paul Gallagher SC, for Kenmare, said. He was unaware of any similar award in the UK or other European country. It is “obscene” to say a defamation of this nature is worth more than 20 times an injury that would cause someone to be a quadriplegic for the rest of their life, counsel added.

The award was made in 2010 after a High Court jury found Mr Kinsella was defamed in a company press release issued on July 10th, 2007, concerning an incident in Mozambique in May 2007, where a company board meeting was being held, when Mr Kinsella sleep-walked naked to the bedroom of company secretary Deirdre Corcoran.

The press release referred to an “incident” and said Mr Kinsella was being asked to resign from the company’s audit committee.

An investigation by an independent solicitor on behalf of the company had found there was no conscious attempt on Mr Kinsella’s part to enter Ms Corcoran’s room and no improper motive in opening her door.

Mr Kinsella was prone to sleep-walking.

Mr Kinsella sued the company and its chairman Charles Carvill.

In its verdict, the jury found the press release wrongly meant Mr Kinsella had made inappropriate advances to Ms Corcoran.

Kenmare Resources has appealed both that finding and the level of the award, comprising €9 million in compensatory damages and €1 million in aggravated damages.

Mr Kinsella, who is now aged in his mid-70s, was in court accompanied by family members.

In submissions for Kenmare, Mr Gallagher argued there were “significant errors” by the trial judge, Mr Justice Eamon De Valera, during the trial, particularly concerning how he directed the jury. The jury verdict was “unsafe in every respect”, Mr Gallagher said.

In opposing the appeal, Eoin McCullough SC, for Mr Kinsella, said the trial judge had made “perfectly adequate” directions on the crucial issues in the case.

He said, as a result of the press release, damaging stories about Mr Kinsella were circulated across the world and, absent a substantial wrong or a miscarriage of justice, an appeal court should not interfere with a jury verdict.

When Ms Justice Irvine asked was Ms Corcoran not a company secretary, Mr Doyle agreed she was but said she was a person with “less clout” than Mr Kinsella.

The press release resulted in Mr Kinsella being made an “international laughing stock”, he said. While accepting the €10 million award was “extraordinarily high”, that must be seen in the context of Mr Kinsella’s reputation in Irish business and society and the impact of the matter on him, he said.

The jury did not “pluck this sum out of the air”, he added. In reply, Mr Gallagher said Mr Kinsella was not that well known in business circles and there was no evidence before the jury as to the effect on his business.