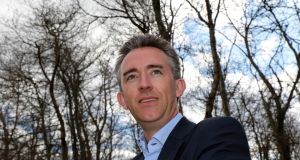 Coillte chief executive Fergal Leamy on the State’s view of forestry: “We just don’t get it yet” Photograph: Nick Bradshaw

The chief executive of Coillte estimates that output from Irish forestry will double in value to nearly €5 billion over the next 10 years, as the current crop of trees mature and the timber is harvested.

However, Fergal Leamy, who took over at the helm of the State’s forestry company in 2015, said the State is still failing to embrace its forestry potential, with forestation levels and afforestation (planting) rates well below the European average despite the fact that Ireland enjoys faster tree growth than most EU rivals.

Around 11 per cent of the Republic’s land mass is forested compared to a European average of 38 per cent, while around 4,000 hectares a year are being converted to forest, significantly below the Government’s target of 7,000 hectares.

“There’s not an acceptance of forestry in this country. If you look at other countries it is so embraced as a sustainable industry, an industry that adds economic and environmental value,” Mr Leamy said, hinting that other sectoral interests still dominate the Government’s agenda.

“We just don’t get it yet,” he said, noting the planned expansion in agricultural and the likely growth in carbon emissions that implies will need to be offset by a major afforestation programme.

Traditionally Coillte, in contrast to its counterparts aboard, has not undertaken afforestation projects because the economics have not made sense, but Mr Leamy believes this will soon change as Coillte’s financial position improves and the Government considers allowing it access to grants.

He was speaking as the semi-State announced its full-year results for 2017, which showed it had doubled its operating cash from €15 million in 2016 to €30 million in 2017 on foot of record revenues of nearly €300 million.

As a result, it paid the Government a dividend of €8 million, 29 per cent up on the previous year .

Coillte is in the middle of a major five-year restructuring process aimed reducing its reliance on large-scale land transactions and focusing on its three core business divisions - forestry, wind energy and wood panel manufacturing.

Mr Leamy said €20 million had been shaved off its cost base, principally by reducing head office staff from 100 to 17 and reducing the group’s reliance on outside consultants .

“We really simplified what we were doing. We’re not that complicated a business - we grow trees, we sell logs, we manufacture timber products and we build renewable energy wind farms,” he said.

His plan is to create an annual return on assets for the State of 5 per cent by 2020 - last year it was 3 per cent.

Operating cash from its forestry division increased by 13 per cent to €25.7 million driven by an increase in sawlog sales volumes and improved sawlog prices, Coillte’s figures show.

The company has begun the process of putting up for sale its stake in four wind farms it Co-developed with ESB, USE and Bord Na Móna, while it has identified 25 sites that are suitable for large-scale landforms and will later this year seek a strategic partner to develop the sites, which will have the potential to generate electricity for up to one million homes.

Coillte is expected to generate up to €125 million from the sale of its wind energy four projects, with the cash recycled through the business.

“The business is seeing good momentum in 2018 with a strong performance in the first quarter,” Mr Leamy said.

“This is a crucial year for Coillte as we expect to see a step change in earnings following an intense phase of organisational restructuring and investment,” he said.