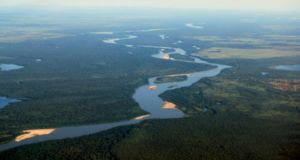 Celestial Green Ventures is involved in the development of carbon credits from projects in the Amazon basin. Photograph: Getty Images

Celestial Green Ventures plc, a Dublin-based company that was listed for a time on an exchange in Germany, made a pretax loss of €864,617 in the 13 months to the end of 2011, according to accounts just filed.

The company, which is involved in the development of carbon credits from projects in the Amazon basin, was set up in November 2010 to acquire Celestial Green Ltd on a share-for-share basis and was listed on the First Quotation Board of the Frankfurt Stock Exchange in May 2011.

The purpose of the flotation was to obtain investment to develop the business. The quotation board was closed in December 2012 and the directors of Celestial decided not to progress the listing up to entry-level standard, according to the accounts.

The principal activity of the company is the development of reduced emissions from deforestation and forest degradation (REDD+) projects, thereby generating carbon benefits. The company’s negotiation of agreements with indigenous groups in Brazil was the subject of controversy and court hearings there last year.

In the accounts the company says it had received third-party validation earlier this year of a 20-year project with 7.7 million natural capital credits being approved for the period June 2011 to July 2012. The company’s balance sheet shows financial fixed assets of €966,172, debtors of €9.8 million, creditors of €12.3 million, and a shareholders’ deficit of €864,387.

In notes to the accounts, the company says its directors believe the validation of its carbon credits earlier this year will allow for the sale of the credits and the reversal of the company’s net deficit position. On this basis, the accounts were finalised on a going-concern basis.

The accounts show the company had one employee during the period, at a cost of €10,477.

They state that the issued share capital of the company was incorrect in filings to the Companies Registration Office upon incorporation, but that this has been rectified.