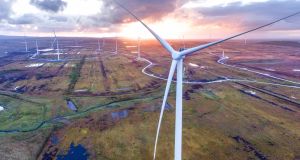 Bord na Móna is also building a wind farm at Oweninny, Co Galway, in partnership with the ESB

Bord na Móna has begun building a €100 million wind farm at Cloncreen, Co Offaly, that the State company says will be able to supply up to 55,000 homes with electricity every year.

The company, which is seeking alternative businesses to managing and harvesting peat, is working on several renewable energy projects around the Republic, including wind farms.

On Thursday it confirmed that work has started on the 75 megawatt (MW) wind-energy plant at Cloncreen, for which Bord na Móna recently secured permission from Bord Pleanála.

Bord na Móna will get a guaranteed price for the electricity that the wind farm will generate under the State’s Renewable Energy Support Scheme, which is funded by a levy on domestic and commercial electricity bills.

Its chief executive, Tom Donnellan, said: “We are now on track to be able to supply approximately one third of Irish homes with renewable energy by 2030.”

The company is also building a wind farm at Oweninny, Co Galway, in partnership with the ESB.