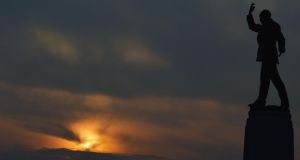 Sir Edward Carson’s statue at Stormont: keeping lights on in the parliament might seem a challenge due to gloomy political backdrop in the North. Photograph: Charles McQuillan/Getty Images

Making sure the lights stay on in Stormont might seem like a tall order at the moment, given the current gloomy political backdrop in the North.

But for Robin McCormick and his team, it is all in a day’s work. McCormick heads up the organisation that manages the North’s electricity transmission system.

He is the director of operations with System Operator Northern Ireland (Soni) which is responsible for matching demand with supply for electricity users in the North. Soni is also in charge of the wholesale electricity market, juggling Northern Ireland’s myriad of suppliers from older generation power stations to renewable energy sources.

For the last six years the company has been part of EirGrid – the Irish State-owned energy company which does exactly the same job in the South – and both operate the Single Electricity Market on the island.

This, according to McCormick, delivers benefits for electricity users across the island because it creates economies of scale and a concentrated focus on investment priorities.

He says the advantages of a unified approach which recognises the different requirements on the island but also appreciates the ongoing need to build the right infrastructure to meet future demand is vital for both economies on the island.

McCormick says a second North-South electricity interconnector is an important step in helping to create a more efficient electricity market. Plans for a second £250 million interconnector have been in circulation since 2007 but various planning hurdles have delayed the process.

He estimates it could reduce overall electricity prices by £14 million per annum.

“Our first priority is security of supply – we have to make sure the lights don’t go out – but we are very aware that when it comes to electricity, price is always an issue for everyone and we are keen to maximise the benefits we can deliver for every customer,” McCormick says.

“We have to ensure we have adequate generation on the island because we have to be able to anticipate and deliver on demand in Northern Ireland.

“A strong and reliable electricity network is vital; it will help grow the economy, it is important when it comes to attracting new investors who will create job opportunities in Northern Ireland.”

He says one of the other benefits of further interconnection is the potential opportunity to sell any excess capability to neighbouring markets.

This could, according to McCormick, create new opportunities to reduce costs, and the cost of electricity is definitely one of the issues which will be high up the agenda for delegates at the 10th annual EirGrid group conference in Belfast next month.

Just before the latest local political crisis paralysed the Northern Ireland Executive, the issue of electricity pricing and grid connections was also high on its agenda.

“More urgency needs to be given to the critical matter of electricity policy and how it impacts on businesses,” McGlone says.

“It is essential that the potential for future economic development is not curtailed because of a failure to consider important economic factors in the development of electricity policy.”

First though politicians at Stormont need to figure out this week how to keep the lights on themselves because there is the very real prospect of the entire Northern Ireland economy being plunged into a period of darkness if political agreement cannot be reached.