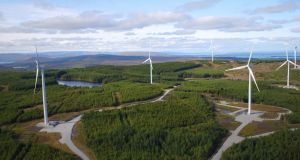 SSE and Coilte estimate that in a typical year, the green energy produced at Galway Wind Park will offset over 220,000 tonnes of harmful CO2 emissions

The State’s largest wind farm, which is expected to generate enough renewable energy to power more than 140,000 homes, has entered commercial operation.

Galway Wind Park, which is located in the Cloosh Valley, near Oughterard, has been developed by Airtricity owner SSE and State forestry company Coillte as a €280 million joint venture.

The farm, which has the capacity to generate 169 mega watts (MW) of electricity, comprises 58 Siemens 3MW wind turbines.

SSE and Coilte estimate that in a typical year, the green energy produced at Galway Wind Park will offset more than 220,000 tonnes of harmful CO2 emissions.

Galway Wind Park was constructed in two phases over almost three years, with main works commencing in December 2014. Phase one was fully financed by SSE at an investment cost of about €105 million while the second phase was funded by project finance of €176 million from BBVA, Rabobank and Nord LB.