Nobody dreams as big as Elon Musk, the serial entrepreneur who has space in his sights 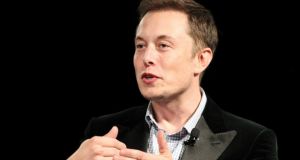 For a man who has just been introduced as a modern Isambard Kingdom Brunel or Henry Ford, the 41-year-old Elon Musk looks nervous and hesitant as he takes the stage at Oxford University’s Sheldonian Theatre, fiddles with his jacket (no tie) and takes a long draught of water before starting to speak to the 700 who have filled Sir Christopher Wren’s balconies to hear him.

Musk is tall, broad-shouldered and lean, and his physical presence, wealth and reputation ought to make him intimidating. But he speaks in the calm, reflective, even hippyish cadences of Silicon Valley and his accent, like his first name, is neutral and unplaceable, as suits a man whose ambitions and activities are extraplanetary.

He starts many sentences with “So”, and having built four billion-dollar businesses is comfortable with conspicuous understatement. “So I decided to do a couple of internet companies,” he says as he summarises his early career, “and that actually worked out reasonably well.”

Musk came to Oxford in the midst of a few months which have been extraordinary even by the absurdly compressed, accelerated standards of that career.

South African by birth, now a US citizen, and a physicist by training, he made two dotcom fortunes by 31, selling an online publishing business to Compaq for $307 million, and then, with his partners, selling PayPal to eBay for $1.5 billion in 2002.

Musk then decided to invest his considerable resources in what he thinks are the three most important issues facing humanity. He had already conquered the internet. To help reduce our dependence on fossil fuels he founded Solar City, which builds and installs solar panels, and electric carmaker Tesla. And to further his belief that we should become a “space-faring civilisation” he founded SpaceX “to develop the technology to transport large numbers of people and cargo to Mars. That has to be solved at some point by some company, or it’s not going to happen.”

Musk is as charming in private as he is modest in public, and has an instantly apparent intelligence. He is chief executive at both Tesla and SpaceX, but is far more than a walking wallet: he creates the products too, holding the titles of product architect at the former and chief technology officer at the latter.

We met in Detroit recently, a couple of months after his Oxford appearance. He opens with an unprompted reference to his unsuccessful legal action against Top Gear over a segment which implied that a Tesla had run out of charge and had to be pushed. It plainly still rankles. “Jeremy Clarkson is a huge d**k,” he says, “and you can quote me on that.”


These past few months have been good for Musk. In October, his Dragon spacecraft docked with the International Space Station, the first mission in his $1.6 billion (€1.22 billion) resupply contract with Nasa.

Solar City went public in December at a value of nearly $500 million, and its share price has since more than doubled.

Tesla made its IPO in 2010 and is also now trading at more than twice its initial offer price, with a value of more than $5 billion, having this week announced its first profitable quarter. The factory in San Francisco closed by Toyota in the financial crisis and reopened by Tesla will make its target 20,000 cars in a full year, and the Model S won Car of the Year awards from both Automobile and Motor Trend magazines in the US.

Musk also launched the Supercharger network of fast-charge stations on interstates which allow Model S owners to add three hours’ driving time in a half-hour stop. The Model S goes on sale in right-hand drive in the UK and Irish market early next year and Musk expects “to do more sales in Europe than the US in the long term, as the cost of petrol is so much higher, the distances travelled are shorter and the environmental consciousness is higher”.

But these past few months are not typical of the 11 years since Musk cashed out of PayPal. The Irish Times last met him in 2009, when both Tesla and SpaceX had almost died – Tesla suffered cost over-runs and design reboots that delayed production, and SpaceX a third launch flame-out that left everything hanging on the final attempt. And the economy tanked. Just how bad was it?

“It was like being in the stockade while people hurl shit at you,” Musk says (this, and the Clarkson quote, not reflecting his more typical gentlemanliness.) “We struggled very badly for many years just to keep the company alive. I had nothing left. I had to borrow money for rent. I sold everything I could, and I would have sold the plane too except that in 2008 you literally could not sell a plane.”

The plane is a Dassault Falcon 900 intercontinental jet; there’s also a vast new Bel Air mansion. But Musk is far from materialistic. “Profit is important in that if you don’t make more money than you spend, eventually people will stop giving you money and you will die. But it’s not something that’s of personal interest to me. I just want to have the resources to get the things done that I think matter.”

For Musk, this is a simple statement of fact and not an invitation to be grateful for his altruism. In America, not everyone is: he and his businesses are far from universally popular. It’s not so much Elon himself; instead, the controversies are more to do with the nature of the businesses and the circumstances in which they operate.

In Tesla’s case, Republicans objected to the $465 million low-cost Federal loan it received from a fund introduced by president Obama to reanimate the US car industry after the financial crisis. Mitt Romney referred to Tesla as a “loser” company in the presidential election debates – “it was hurtful, he just didn’t know what he was talking about”, says Musk – and there is a noisy antipathy towards electric cars from those who question their price, practicality and true environmental benefit.

Difficult times will come again, and soon. Musk will have to put people on his rockets – “that will be a very nervous day” – and two new models for Tesla will increase its volumes tenfold. He also needs to design the fully reusable rockets he believes are needed to make a Mars commute financially viable.

And as if this wasn’t enough, he has plans for a supersonic, vertical take-off and landing electric jet, and for a supersonic underground transport system called the Hyperloop which he says could link LA and San Francisco in 30 minutes and would cost $6 billion to build. He won’t talk details, yet, and had planned to publish a paper on it after his Oxford speech, “but I just didn’t have a spare neuron. All existing neurons were redlined.”

If the Hyperloop sounds far-fetched, so did the idea of a private individual building, from scratch and to his own design, a rocket and spacecraft that would dock with the International Space Station, something only four governments have achieved. Don’t bet against any of Musk’s plans; not even the Mars shot.