Sale to Canadians subject to a 10-year confidentiality clause 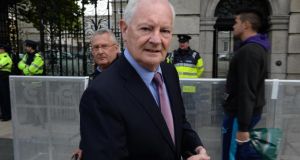 Former minister of state for the Gaeltacht Dinny McGinley

Enterprise Ireland has confirmed that it expressed concern almost two years ago about the sale of State-owned seaweed company Arramara Teoranta by Údarás na Gaeltachta.

The Gaeltacht development authority has separately confirmed that details of the controversial sale to a Canadian buyer are the subject of a ten-year confidentiality clause.

It has also confirmed that it agreed on a five-year capital investment programme in the seaweed company before its privatisation.

Minutes of Údarás na Gaeltachta board meetings obtained under the Freedom of Information Act by Irish language news website tuairisc.ie warned of “serious consequences” if details of the sale were made public.

Board members attending a meeting on March 1st, 2013, were asked to hand documentation back before leaving.

The board was told in July 2013 of concerns expressed about the sale by Enterprise Ireland chief executive Frank Ryan to then minister of state for the Gaeltacht Dinny McGinley, but details have been redacted in the documents released to tuairisc.ie

Enterprise Ireland told The Irish Times that it “did have communication with the Minister” in advance of the sale, but said that “the details of that matter are and continue to be commercially sensitive”.

The Gaeltacht authority said yesterday that “Enterprise Ireland expressed their views and, after discussions and further clarification on a number of subjects with Údarás na Gaeltachta and the Minister, approval for the sale of Údarás na Gaeltachta’s share in Arramara Teo was received”.

Mr McGinley and Acadian Seaplants did not respond to requests for comment.

Several politicians, traditional harvesters and a former Arramara chief executive were critical of the deal, which took place at a time when the company was making a profit.