You're a woman? You probably earn €12,500 less than your male colleagues

The average earnings gap between men and women in Ireland stands at 20%, survey finds

French feminist activists stopped working at 4:34 p.m on November 7th to protest against gender pay gaps. The disparity in pay between the sexes is the equivalent of french women working from November 7th to the end of the year. Video: Reuters 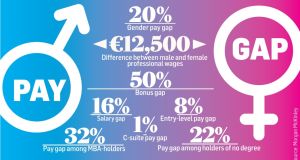 Female professionals earn €12,500 a year less than their male counterparts, according to new research by Morgan McKinley.

The professional recruitment company partnered with global salary benchmarking experts Emolument, to collate data from more than 5,500 professionals working in Ireland, through an online survey.

The results showed the average earnings gap in Ireland in 2016 stands at 20 per cent, with men working in professional jobs earning total compensation packages of €61,500 on average, compared to €49,500 for women.

The research found the earnings gap increases along with the education level attained. While the gap is 10 per cent for employees holding a BSc degree it rises to 33 per cent for Executive MBA holders. That represents a gender pay gap of €32,500 annually, compared to €11,500 (22 per cent) difference between men and women with no degree.

The survey revealed there is a narrowing of the gender pay gap for women who make it to the top. They are paid almost the same as men at chief executive and other top executive levels (1 per cent pay gap).

Morgan McKinley chief operations officer Karen O’Flaherty said companies need to start effectively addressing wage transparency, before they are obliged to. “The most surprising aspect of the findings of our research is that it would appear that the higher their educational attainment and the more experience they have, women find themselves being paid even less than their male counterparts. This is a very serious issue for the woman affected and for society as a whole. It can only harm our prospects for future economic growth if it is not addressed urgently.”

She said the technology and professional services sectors deserve plaudits, with the lowest pay gaps found in Big Data (3 per cent), accounting (5 per cent) and audit (8 per cent).