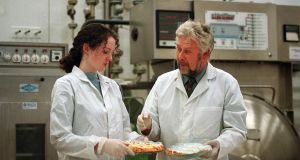 The sight of 7,500 dead pigs, and counting, floating on the Huangpu River near Shanghai has dominated the headlines in China around the annual parliament, the National People’s Congress, and raised calls yet again for more to be done about guaranteeing food safety.

The surge in the dumping of dead pigs – believed to be from farms in neighbouring Zhejiang province – follows police campaigns to stop the illicit trade of pork harvested from diseased pigs. Few doubt that something needs to be done, but the scale of the challenge is immense – 200 million farming families and 500,000 food processing companies, most of them with fewer than 10 workers. Regulating them are at least five regulatory bodies, looking at quality supervision, while there are a handful of other bodies involved in the food safety process at other ministries.

China has more than 5,000 standards on food quality and hygiene, formulated by a number of different departments, according to the ministry of health. There are signs the government is trying to do something. Last week, it announced it would upgrade existing food safety watchdogs to create a new superministry, called the general food and drug administration.

There are regular scandals about food safety, ranging from the use of the industrial chemical melamine in infant formula, which killed at least six children and sickened nearly 300,000 in 2008, to the use of toxic “gutter”, or reused, cooking oil.

The ministry is being set up as part of efforts to improve efficiency and reduce bureaucracy. It will be responsible for setting standards and monitoring production, distribution, and consumption – tasks previously handled by more than a dozen organisations. “In the past, food safety issues were jointly tackled by 13 departments, but none of them could do their best to supervise food safety,” said Zhang Liyong, head of Henan Province’s High People’s Court and an NPC delegate.

“We have seen standards contradict each other because of the involvement of so many departments,” said Mr Zhang. “Only by the use of clearly defined standards can law enforcement workers do their job correctly and efficiently.”

1 Aldi empire wracked by family feud
2 NatWest considers closing Ulster Bank in the Republic
3 Volkswagen close to selling its Bugatti supercar brand
4 Eason faces a defining chapter in its long history
5 EU signals late call on Apple tax appeal as deadline looms
6 Four-day week is a campaign worth watching
7 Gabriel Makhlouf: ‘A full second lockdown would be very serious for the economy’
8 NatWest confirms review of Ulster Bank as Covid-19 bites
9 Cliff Taylor: What permanently low interest rates mean for you as a saver or borrower
10 ‘I just thought it sounded exciting and different’
Real news has value SUBSCRIBE