Work permits prove hard to come by for Syrians in Turkey

Brussels may think refugees get jobs in Turkey easily. The truth is very different 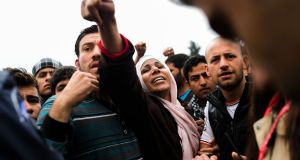 Syrian refugees: fewer than 0.1 per cent of those seeking asylum in Turkey have been given work permits. Photograph: Kilicbulent Kilic/AFP/Getty Images

Fewer than 0.1 per cent of Syrians in Turkey stand to gain the right to work under much-vaunted Turkish labour laws, undermining EU claims the legislation excuses a recent decision to deport Syrian asylum-seekers back to Turkey.

Turkish employers have allowed roughly 2,000 – or 0.074 per cent – of Turkey’s 2.7 million Syrians to apply for work permits under new legislation enacted two months ago, according to government figures provided to aid workers at a meeting in late March. The number of permits granted has not yet been disclosed.

More applications are expected in the coming months, but the statistic nevertheless highlights how the new law, enacted in January, does not offer blanket access to the labour market for all Syrians in Turkey. Instead, work permits can only be given to those who have the blessing of their employers, many of whom may still be unaware of the law, or unwilling to comply with it since it would require them to pay their employees the minimum wage.

The figure was revealed in a speech to aid groups by the head of Turkey’s general directorate for migration management, who said he hoped the number would rise once more people were aware of the law.

The news will complicate the new EU-Turkey deal to deport all asylum seekers arriving in Greece back to Turkey, since the EU has justified the controversial agreement by claiming Turkey was a place that upheld internationally agreed obligations to refugees, including access to legal work.

While Turkey is not a full signatory to the 1951 UN refugee convention, EU politicians have sometimes cited the January law as an example of how Turkey maintains the values of the convention by other means. But in reality the law does not automatically offer most refugees a route out of the black market, several Syrians argued in interviews.

“The minimum wage is 1,300 Turkish lira and most employers refuse to give contracts so that they can pay less, and don’t have to pay your health insurance.”

Zakariah Abdullah, a 37 year old from Aleppo now making cheap clothes in Istanbul, cannot imagine a situation in which any employer would help him legalise his working conditions.

“It’s impossible,” said Abdullah, who reluctantly let his 12-year-old son work in a sweatshop so his family could make ends meet. “If they helped us get a work permit, they’d have to pay us like Turkish workers – and they would never want to do that. Now I get 1,200 lira, whereas a Turk would get 2,200 lira for the same work. With a work permit, they’d have to pay me the same.”

Turkish officials in the labour and interior ministries did not respond to questions about the law via email, or make themselves available for comment when contacted by telephone.

But independent groups have praised the Turkish government for taking a step in the right direction. The International Labour Organisation (ILO) said that while the law does not offer the right to work to all Syrian refugees, it is a welcome mark of progress.

“All in all, this a great opportunity and a great step by the government,” said Numan Özcan, head of the ILO’s Turkey office. “It’s not a blanket work permit for everyone. In some sectors it will work better than others [but] so far these people had no possibility of working legally – and now they do have that possibility.”

Veysen Aycan, head of IMPR Humanitarian, a Turkish group that works with refugees, argued the government was not to blame for the low number of applications so far, and was doing all it could to promote awareness of the law.

Some Syrians are more sceptical, because their applications have to be made with the blessing of their bosses.

Mohamed Deeb Aqra (48) says he would be sacked even for asking for his employer to help get a work permit. “The law hasn’t changed anything,” said Aqra, who makes shoes in a factory. “If I asked for a contract, he will fire me. There are so many Syrians asking for jobs, so I could be replaced very easily. Every day several people knock on the door asking for work.”

The lack of realistic access to the legal labour market will continue to encourage Syrians to leave for Europe, Aqra said. “Why do you think Syrians want to go to Europe?” he asked. “There is no law that guarantees a proper salary for us.”

The January legislation is also problematic for Syrians because it does not apply to firms where more than 10 per cent of the workforce are from Syria.

Youssef Frayha, a Syrian student, said he had been unable to get a kimlik because his landlord had refused to give him a rent contract – one of the requirements for a kimlik applicant. This bureaucratic snag was what prompted Frayha to try to reach Greece recently, even after the introduction of the EU-Turkey deportation deal. – (Guardian service 2016)

Ireland’s need to balance the budget books has not gone away, you know 06:00
‘I felt like I was in a zoo without the fences’ 05:38
State’s data privacy watchdog finds bite after first year of handing out fines 05:33
Campsited raises €600,000 as part of new €3m funding round 05:30
Why the sudden scramble to add a sustainability officer to the C-Suite? 05:30