Why figuring out the ESRI figures is tricky business 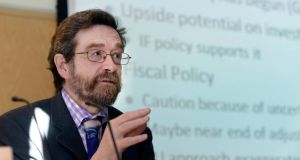 The Irish economy is like a dog barking and wagging its tail at the same time. The question is which end to believe.

The tail-wagging bit is the healthy acceleration in employment, which saw the creation of 40,000 jobs last year – a trend that appears to be continuing.

The unfriendly bark element is the nosedive in gross domestic product (GDP) at the end of last year, which caught most observers by surprise.

“We’ve never had more difficulty in understanding what’s going on in the Irish economy,” Prof John Fitzgerald’s admitted yesterday at the launch of the Economic and Social Research Institute’s latest quarterly bulletin.

He was alluding to the level of statistical noise affecting the State’s headline economic numbers, which is making economic analysis more dark than dismal.

Whichever way you look, it’s hard to reconcile the exceptional jump in employment growth last year with the parallel contraction in GDP.

According to the ESRI, the explanation is twofold.


Patent expiry
The well-documented expiry of patents has hit profits in the State’s disproportionately large pharmaceutical sector, which has in turn distorted the State’s output data.

While this is expected to work itself out in the short term, there is another distorting phenomenon that may prove more difficult to shift.

Instead of earning profits in Ireland from increased sales, firms operating in the information and communications technology sector have recently opted to pay increased royalty payments abroad.

This reduces their tax liabilities here but, in terms of the national accounts, reduces value added – an estimate of a firm’s economic profit – which also drags GDP down.


‘We just don’t know’
Both issues are making the State’s growth metrics jump about wildly. Though the ESRI is predicting GDP growth of 2.6 per cent this year, Fitzgerald admitted the actual figure could easily be zero or 4.5 per cent, “we just don’t know”.

As a result, the ESRI insists gross national product (GNP), which strips out the potentially distorting profit flows of multinationals, is the more accurate measure of economic wellbeing. Until recently, GDP always grew more rapidly than GNP. In more recent times, they have flip-flopped.

The constant need to explain “special factors” affecting the Irish accounts could, the ESRI claims, raise suspicions that things are being covered up whereas, in fact, tremendous efforts are being made to be as transparent as possible.

“To better understand what is happening in Ireland today significant additional data are needed, supplementary to the national accounts, which would show the contribution of each sector of the economy to GNP,” the ESRI said.

There seems, however, little appetite in Europe to correct these accounting problems, largely because multinational firms play a more limited role elsewhere. On that basis, it seems, we’ll have conflicting figures for some time to come.