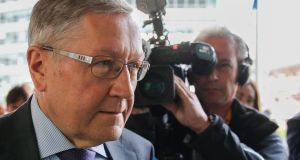 Klaus Regling: as director of the ESM he helps manage the bailout programme and loans. Photograph: Julien Warnand/EPA

Ahead of tomorrow’s referendum uncertainties abound over whether Greece will apply for a third bailout, what it would look like and, most importantly, who would supply the money.

In terms of logistics, any request from Athens would most likely be made to the Luxembourg-based European Stability Mechanism (ESM) and to the head of the eurogroup, Jeroen Dijsselbloem.

The ESM – which effectively manages the bailout loans on behalf of euro zone countries – was not in existence at the time of the first and second Greek bailouts. Instead, the €500 billion euro zone rescue fund subsumed its predecessors the European Financial Stability Facility and European Financial Stabilisation Mechanism when established in 2012.

The treaty governing the fund states a bailout can be sanctioned “to safeguard the financial stability of the euro area as a whole and of its member states”. However, this week’s striking lack of contagion effects – evidenced by relative calm on stock markets – has prompted some to speculate an ESM bailout request should be refused as euro financial stability as a whole is not in peril.

But another reading of the ESM rules says the obligation to safeguard the stability of the euro area’s “member states” means the euro zone has a responsibility to Greece – which, after all, is a member.

Still others argue the Cypriot bailout of 2013 was sanctioned without an obvious threat to euro financial stability of the euro area, so why not Greece?

While the ESM fund and its director, Klaus Regling, manage the bailout programme and loans, ultimately decisions about the fund are made on a political level by the eurogroup of finance ministers who are the institution’s shareholders – ie, the 19 euro zone member states.

A crucial aspect of any new ESM programme is parliamentary approval of six euro zone members: Germany, the Netherlands, Finland, Estonia, Austria and Slovakia. In these countries, approval can range from a simple parliamentary committee backing to a full plenary vote.

Whether the IMF will remain on board in a new Greek programme is another open question. The ESM treaty states the institution will co-operate “very closely with the International Monetary Fund in providing stability support” but seeking its participation at technical and financial level is a recommendation, not an obligation. The Spanish bailout, which saw the ESM provide Spain with a €40 billion banking bailout, sets a precedent here. The IMF was not involved because it was exclusively a programme for banks.

With signs of increasing divergence between the IMF and EU leaders about the Greek bailout, not least the IMF’s push for debt relief for Greece, questions hang over whether IMF involvement is necessary or desirable in a third bailout. The Washington-based fund is increasingly frustrated with its involvement in the bailout of developed, euro zone economies. But some influential countries such as Germany are keen to keep the IMF on board.

An even higher hurdle could be the national parliaments. Changes and extensions of existing bailouts passed parliaments with little fanfare, but an entirely new bailout package will require a full vote in several countries. While no national politicians are enthused at the idea of further risk exposure to Greece, scepticism is running high in Finland and Germany.

The right-wing populist Finns Party has joined the new centre-right coalition in Helsinki since the last Greek programme extension. A staunch opponent of bailouts while in opposition, whether or not they back one now while in office will be their first key credibility test.

MPs from his ruling Christian Democratic Union (CDU) gathered in the Bundestag yesterday to discuss their strategy on Greece. They remind anyone who’ll listen they have not one but two chances to vote on – and potentially torpedo – any further aid to Greece. The federal government needs a Bundestag mandate to open bailout talks and Bundestag backing at the other end to sign off on the final deal.

Yesterday’s declaration of Greek default by the EFSF – the first-iteration bailout institution lending to Greece – has concentrated minds in Berlin that funding options are diminishing. But independent-minded German MPs have a narrower reading than some of activating the ESM, insisting a broad, existential euro zone threat is a prerequisite.

“It would have to be the ESM, the others funds like the EFSF have expired,” said Gunther Krichbaum, a CDU MP and head of the Bundestag European affairs committee. “But I don’t see a basis for an ESM package because, after doing our reforms in the last years, we have immunised ourselves from Greek contagion and a fundamental risk to the currency.”

They were unimpressed, on Wednesday, Schäuble seemed to flag more euro integration as Germany’s price for backing another Greek deal. While the minister’s officials declined to parse their boss’s comments, German MPs said such promises were not an effective way of sweetening the bitter pill of a vote on a third bailout. “We need treaty change for any meaningful European integration and that’s difficult to achieve at the moment,” said Krichbaum. “The Greek issue has already sucked out all the energy out of us.”

Given the uncertainty over the vote, an official close to chancellor Angela Merkel said it was impossible to know just how to act until Monday. He described the week just past around Europe as a “dance around a golden calf – all symbolism”.