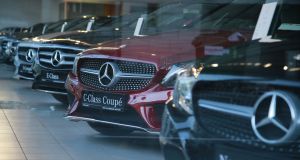 Charles Hurst is allowing Irish consumers to buy a car in the North to avail of the weaker pound and collect it in Dublin. Photograph: Nick Bradshaw

The weak pound is driving record numbers of consumers from the State to the North this summer in search of a sterling bargain, say some Northern Irish businesses.

Big-ticket items including cars, household purchases and holidays are among the most popular reasons why euro zone residents are making the journey north, latest figures suggest.

Jeff McCartney, sales operation director with Charles Hurst, Northern Ireland’s largest car dealership, said this month to date there has been an 18 per cent year-on-year jump in its used-car sales to consumers resident in the Republic.

Mr McCartney said since the Brexit vote last year and its subsequent impact on the value of the pound there has been a change of direction in car sales on the island.

“We have seen a major increase in our sales to people who are coming up from the south to buy in the North and that’s because of the strength of the euro.

“Every day we handle growing numbers of online inquiries from potential buyers in the South, and on any given Saturday you only have to walk around our 20-acre complex on the Boucher Road in Belfast and see how many Irish-registered cars are temporarily parked on site or listen to the accents to get a snapshot of what demand is there from consumers from the South,” Mr McCartney said.

He said by far the biggest demand from buyers from the South is for quality used “family cars”.

But he said Charles Hurst, which also has a UseDirect dealership in Dublin and owns the Audi South Dublin dealership, is also seeking brisk demand for “premium” cars such as Mercedes and BMWs.

Mr McCartney said that because of the number of buyers it is dealing with from the South on a daily basis, it has established a service whereby Irish customers can buy in the North and collect at its Dublin branch.

“We handle all the documentation, VTR, finance options if they are required, and all it takes is one visit to the North. It is all very simple now,” Mr McCartney said.

Last week Charles Hurst’s parent group, Lookers, announced its latest set of interim results, which highlighted revenue increases of 5 per cent to £2.46 billion and a jump in pretax profits of 14 per cent to £44.6 million.

But its chairman, Phil White, also warned that the second half of the year might not deliver the same performance because the UK’s “current political environment, Brexit and weaker exchange rates” had created a degree of uncertainty in the UK economy.

But in the North the fallout from Brexit has had the reverse impact on its business when it comes to attracting new customers from the Republic.

Meanwhile, Belfast International Airport has also said that it has seen a significant increase in the number of passengers from the South travelling through the airport this summer.

The airport has released figures that show the number of car park transactions at the airport by cars registered in the Republic from July 14th to August 14th increased by 135 per cent year on year.

It expects that, overall during 2017, the airport is likely to see more than 600,000 passengers from the Republic use its services.

In the past during the height of the summer season the airport used to lament the number of Northern Irish residents travelling south to fly from airports in the Republic, particularly Dublin Airport.

Now according to Graham Keddie, Belfast International’s managing director, Brexit has created a different kind of tail wind for air passengers – at least from the Republic.

“This is a quite incredible performance. People from across the Border are getting amazing value for their euro at present and are making the most of the exchange advantage.

“We also embarked on an extensive advertising campaign in the six southern Border counties, and that has obviously paid off, too. It has been so good that we intend rolling out a second campaign shortly.

“Generating business of this magnitude and producing a revenue increase of an incredible 250 per cent shows there’s huge potential across the Border,” Mr Keddie said.