Sixty recruits wanted for next phase of Going for Growth ,which assists women in fully exploiting their entrepreneurial talent 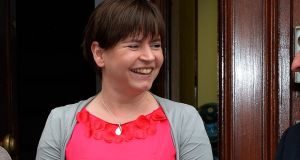 Siofra Flood, former COO of Swrve, has committed to becoming a lead entrepreneur for the next cycle of Going for Growth. (Photograph: David Sleator/The Irish Times)

Going for Growth is looking to recruit 60 female entrepreneurs to participate in the next phase of its entrepreneurship programme.

The programme, which involves a time commitment of one half day a month for six months, is free of charge to suitable applicants. The selection process is competitive and successful applicants will need to demonstrate significant aspirations for growth and should be working full time on the business, which should be located in the Republic of Ireland.

Paula Fitzsimons, the national director and founder of Going for Growth, says there is still significant untapped potential among women: “If women were to start new businesses at the same rate as men, there would be 5,000 more individuals setting up new businesses in Ireland each year. But it is not just about starting. To maximise the economic impact and job creation potential of their business, these women entrepreneurs need encouragement and support to develop their business to its full growth potential. Going for Growth is designed to do just that by assisting them to fully exploit their entrepreneurial talent.”

A number of successful businesswomen have committed to becoming lead entrepreneurs on a voluntary basis for the next cycle including Áine Denn, The TAS Group; Heather Reynolds, Eishtec; Nikki Evans, Perfect Card; and Susan Spence, SoftCo.

Six such programmes have been completed to date, with over 350 women taking part in the scheme since 2009. In the most recent programme of Going for Growth, participants increased their turnover by an average of 15 per cent, bringing the turnover of the group to over € 47 million, while 88 jobs were created by participants and there was a 22 per cent increase in the number of exporters.