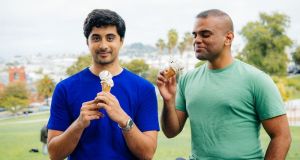 Ryan Pandya (left) and Perumal Gandhi of Perfect Day, the Cork-born biotechnology company has begun selling an ice cream free of animal products, which has been developed using a lab-grown protein

The percentage of mortgage holders prepared to switch providers in search of better value has doubled in the last three years, and is significantly higher than official figures from the Central Bank suggest, according to a report prepared by the banking sector. Conor Pope reports.

The extension of the zero per cent benefit in kind rate for electric motor vehicles for a further three years has prompted a surge of business fleet interest, according to analysis of corporate car finance borrowing by Bank of Ireland. It shows that 45 per cent of loans for electric vehicles in the five months to the end of May have been for business customers. That compares to 28 per cent of all car loans last year going to business customers.

Charlie Taylor reports on how a Cork-born biotechnology company has begun selling an ice cream free of animal products, which has been developed using a lab-grown protein.

Northern Ireland plunged to the bottom of the UK’s shopper footfall tables for June as overall footfall in the North fell by 5.2 per cent leading to grim warnings from retail chiefs about the future outlook for the retail sector.

Forget aboutFacebook’s $5 billion fine - the real story is about how we tax the tech giants. That’s the message from Chris Johns this week, who reckons the Mark Zuckerbergs and Tim Cooks of the world need to look to the recent history of European investment banking if they want to learn some lessons on what happens if you think super-normal profits are the new norm.

Finally, Pilita Clark advises that if you want to garner a real insight into an organisation, take a close look at their restrooms. That’s where you’ll find the real seat of power.