US judge holds Argentina in contempt over bond plan 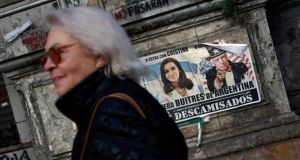 A woman walks past a poster with pictures of Argentina’s president Cristina Fernandez de Kirchner and US District Court for the Southern District of New York Judge Thomas Griesa, depicted as Uncle Sam, near the Argentine Congress in Buenos Aires. Photograph: Marcos Brindicci/Reuters

In a rare move, a US judge held Argentina in contempt, saying the country is taking “illegal” steps to evade his orders in a longstanding dispute with hedge funds over defaulted debt.

A source at Argentina’s central bank nevertheless said the country plans to deposit an interest payment at a local bank today, in direct defiance of US District Judge Thomas Griesa’s admonitions.

Judge Griesa, who has overseen the litigation in New York for years, put off a decision on whether to impose sanctions on the South American country, which defaulted in July for the second time in 12 years after failing to reach a deal with the hedge funds.

But he issued a clear warning that Argentina must stop efforts to get around his rulings by making payments locally. “These proposed steps are illegal and cannot be carried out,” Judge Griesa said, his voice rising, during a court hearing in lower Manhattan.

Those steps, he said, include legislation Argentina passed that would allow it to replace Bank of New York Mellon Corp as trustee for some restructured debt with Banco de la Nacion Fideicomiso while allowing a swap of that debt for bonds payable in Argentina under its local laws.

Despite his ruling, Argentina plans to deposit an interest payment of at least $200 million with Banco de la Nacion Fideicomiso today, the central bank source said.

The developments followed a familiar pattern in the litigation, in which Judge Griesa criticises Argentina for disobeying his orders and Argentine officials defiantly continue to do so. They also underscored the uncertain impact of a contempt ruling on a foreign government.

Argentine foreign minister Hector Timerman said in a statement late yesterday that Judge Griesa’s decision was a “violation of international law” and would have no impact other than to further the fight of the “vulture funds” against Argentina. “The Argentine government reaffirms its decision to continue defending national sovereignty and asking the U.S. government to accept the jurisdiction of the International Court of Justice to resolve this controversy between both countries,” he said.

Judge Griesa has called on Argentina to reach a settlement with the holdouts, appointing a mediator to oversee talks that have thus far been unsuccessful.

Argentina missed a bond coupon payment in late July after Judge Griesa ruled it could not be made unless the country also paid more than $1.3 billion to a group of US funds that rejected previous bond restructurings and are demanding full repayment.

Argentina claims it cannot pay the holdouts, led by Elliott Management Corp’s NML Capital Ltd and Aurelius Capital Management, on what would be better terms than the investors who exchanged their defaulted bonds under the so-called RUFO clause (Rights Upon Future Offers).