Number of people at work rose to 1.9m in June, the highest level since 2009 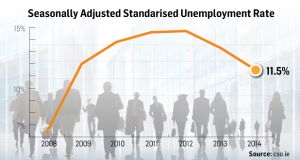 Ireland’s unemployment rate has fallen to five-year low of 11.5 per cent, dipping below the euro zone average for the first time since the financial crisis began.

However, the latest Quarterly National Household Survey (QNHS) also indicates the rate of job creation in the economy while still positive has moderated in comparison to last year.

Regarded as the most reliable set of numbers on the economy, the survey, compiled by the Central Statistics Office, shows the number of people employed in the State in the second quarter of this year was 1.9 million, representing an annual increase of 31,600 or 1.7 per cent.

The figures show the number of unemployed people in the economy fell by 12,700 during the second quarter. This was the eighth consecutive quarterly fall in unemployment.

As a result, the State’s jobless rate fell from 12 per cent to 11.5 per cent, its lowest level since the final quarter of 2009, bringing it below the euro area average of 11.8 per cent.

The survey’s headline rate of unemployment is now the same as the rate estimated by the CSO’s Live Register.

The figures also indicated employment growth - a key measure of economic health - rose by 0.2 per cent, equating to 4,300 jobs, in the second quarter.

While this represents a marginal increase on the 0.1 per cent growth witnessed in the first quarter, it is significantly down on the rates of employment growth recorded last year.

However, several analysts said much of the employment growth of last year was in part-time jobs while more recent gains have been in full-time work, as evidenced by the 2.3 per cent annual increase Full-Time Equivalent (FTE) employment. This would suggest Ireland’s economy recovery is strengthening rather than weakening.

Nonetheless, a worrying development was the disparity in economic recovery between the regions with the latest figures showing unemployment in Dublin City and county falling by 2 per cent on an annual basis but only by 0.5 per cent in the West, which covers Galway, Roscommon and Mayo.

A breakdown of the numbers showed employment increased in ten of 14 economic sectors over the past 12 months, with the largest rates of increase recorded in the administrative and support services sector (+10.7 per cent) and the accommodation and food service sector (+6.2 per cent).

The greatest rates of decline over the year were recorded in the Other Activities sector, which covers a range of miscellaneous industries (- 2.7 per cent); and in the financial, insurance and real estate sector (-1.7 per cent).

Minister for Finance Michael Noonan said the figures pointed to a continuing recovery in Ireland’s employment.“This increase is driven by an increase in full-time jobs and there is evidence that people are moving from part-time to full-time work as conditions in the labour market continue to improve,” he said.

His pointed was echoed by Ibec economist Fergal O’Brien who said “while we’re not seeing the eye-watering employment growth of last year, the quality of employment creation is better.”

He said the initial phase of recovery saw employers take on people on a part-time basis but now “we’re seeing significant growth in full-time positions and that’s a sign real confidence in the economy.”

Despite the improving conditions in the labour market, Minister for Jobs Richard Bruton ruled out the prospect of wage increases, saying the priority was “to continue to focus on employment opportunities” and to create the environment for enterprises to grow.

Nonetheless, he said he hoped the forthcoming Budget would help hard-pressed middle-income earners who were shouldering a relatively high tax burden compared to workers in other countries.

Alan McQuaid, an economist with Merrion Capital, said: “While emigration has been a contributory factor to bringing down the unemployment numbers over the past couple of years, it is clear from the latest migration figures that there is more to it than just that.”

However, Jimmy Kelly, regional secretary of Unite, said there had been a collapse in job creation while earnings were also falling. “This week’s figures confirm what working people have long suspected: recovery is a myth which is not being felt in their pockets,” he said.

1 Eason acquires rival Dubray Books for undisclosed sum
2 Solar panels: Are they worth the investment?
3 Bank leaked my loan request to family who tried to rip me off
4 Fuel company loses €1.3m challenge over tax bill
5 When the Chemistry no longer works – the closing of a leading Irish ad agency
6 Ryanair and Aer Lingus monitor impact of coronavirus on travel to Italy
7 Stock markets tumble into the red for second straight day
8 Longview seeks permission for 753 homes in Cork’s outskirts
9 Up to 5,000 engineering jobs expected to be created in 2020
10 Over $12m from sale of Walford handed over in Sean Dunne bankruptcy case
Real news has value SUBSCRIBE