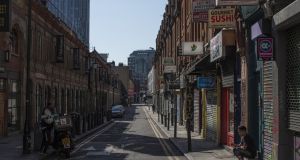 Britain’s inflation rate dropped in March when oil prices tumbled and the coronavirus crisis escalated, official data showed on Wednesday, with a fall in clothing and footwear prices signalling how cautious shoppers were turning.

In what is likely to be the start of a sharp decline in inflation, the consumer price index was 1.5 per cent higher compared with March 2019, as a Reuters poll of economists had predicted, slowing from February’s 1.7 per cent rise.

A fall in clothing and footwear prices was the biggest drag on the index in March, the UK’s Office for National Statistics (ONS) said.

“Prices usually rise between February and March, and this year’s fall is the first since 2015 and only the second since the start of the constructed (inflation) series in 1988,” the ONS said.

Sales were likely to have been impacted by the coronavirus outbreak and retailers resorted to discounting more items on sale, reversing the usual pattern in March as new lines hit the shops, the ONS added.

Although prices were collected on March 17th - a few days before a full-scale lockdown began - the ONS said consumer behaviour might have changed in expectation of the restrictions.

The Bank of England, which has a 2 per cent inflation target, is likely to see the fall in inflation as keeping the way clear for its massive stimulus push to soften a looming and deep coronavirus recession.

BoE deputy governor Ben Broadbent said on Monday inflation in Britain was likely to fall below 1 per cent in the coming months.

“The disinflationary pressure of weak demand in the aftermath of the coronavirus recession due to the fall in employment and consumers remaining cautious will add to the downward influence from very low energy prices,” said Andrew Wishart, UK economist at Capital Economics.

The coronavirus crisis was also changing the way the ONS does its work.

Price collectors had difficulties gathering prices of flour, pasta and eggs which have been in high demand among shoppers stocking up on food and ran out in many shops.

In April, price data collectors are gathering data from retailers’ websites and by phoning and emailing them, rather than visiting shops, to comply with the government’s lockdown order, ONS statistician Phil Gooding said.

Petrol prices at the pump fell by 5.1 pence per litre between February and March, the biggest drop since December 2018 as global oil prices tumbled due to the economic hit from the pandemic and a price war between Russia and Saudi Arabia.

It was a similar story for manufacturers.

Petrol prices were the biggest drag on both output and input cost prices for factories, the ONS said.

Still, factory output prices rose unexpectedly in March, rising 0.3 per cent on the year, against expectations in the Reuters poll for a 0.1 per cent drop. – Reuters