Slump in London house prices weighs on the market 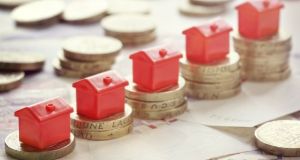 Asking prices for London have dropped 3.2 per cent in the past year, the most this decade

UK house prices grew at the slowest annual pace in more than five years this month as a slump in London weighed on the market.

Asking prices rose 1.1 per cent from a year earlier, Rightmove said on Monday, down from 3.1 per cent in August. While the autumn traditionally sees prices pick up after a summer lull, this year had the first month-on-month decline in September in four years as values in London slumped.

As house price growth slows in response to sluggish economic growth and a squeeze on consumers in the wake of the Brexit vote, the capital’s property market has been the hardest hit. The outlook for house prices further dimmed last week when the Bank of England suggested it may soon raise interest rates for the first time in a decade.

Asking prices for London have dropped 3.2 per cent in the past year, the most this decade and a far cry from growth of more than 20 per cent in 2014, Rightmove said. That chimes with a survey from the Royal Institution of Chartered Surveyors last week, where real-estate agents in London gave their bleakest assessment since 2008.

The most expensive London boroughs saw the biggest drops, with Kensington and Chelsea falling more than 10 per cent in the past year, while those in Hammersmith and Fulham dropped 8 per cent. That was partly offset by gains in Hackney, Southwark and Bexley, while, nationally, the northeast, Yorkshire and East Midlands also saw prices increase.

The slower growth is attracting more buyers, with the number of sales agreed climbing 4.8 per cent from a year earlier. It’s also easing the burden on stretched UK consumers, who are grappling with sluggish pay increases and faster inflation in the wake of the Brexit referendum.

Annual house-price increases are now about half the rate of pay growth, which, Rightmove says, will give buyers much-needed relief from an erosion of their spending power.

“Having finally turned the tables to potentially improve their buying power, buyers will now be hoping that it is not eroded again by an interest-rate rise or rampant consumer-price inflation,” said Miles Shipside, a Rightmove director and housing market analyst.