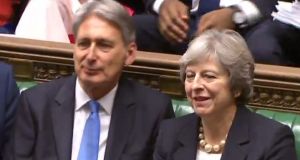 Britain’s chancellor of the exchequer Philip Hammond with prime minister Theresa May after he presented his budget statement in the House of Commons on Wednesday. Photograph: AFP/Getty Images

Moves in the British budget to seek a bigger tax contribution from major digital companies underline the battle facing Ireland from international developments in this area.

Central to these are a demand from bigger countries that more tax be paid where customers live, rather than in lower-tax economies such as Ireland where the big US players tend to have their European headquarters.

In his budget speech, chancellor of the exchequer Philip Hammond announced that the UK planned to introduce a new tax charge on digital companies, based on the sales they make in the UK market. Initially, according to a background paper published with the budget, the tax would be aimed at imposing a charge on royalty payments related to sales made in the UK, where companies channel funds to subsidiaries based in low-tax countries.

Tax experts here said the impact on US companies with European headquarters here would depend on the detail of the plan, which will be published after a programme of consultation. It is designed to capture a share of profits ultimately moving to offshore tax havens with which Britain does not have a double-tax treaty.

It is possible that some big US players with European headquarters in Ireland could be affected. However, a number of these have moved their intellectual property assets out of tax havens in the last few years, with some moving them to Ireland.The initial target to raise £200 million for the UK exchequer each year is modest, suggesting the initial impact will not be major.

Beyond this initial move, a detailed UK paper published with the budget makes clear that the UK supports international moves to change the basis on which the major digital multinationals are taxed and particularly to ensure more tax is paid where digital “users” are based. This is a direct threat to Ireland, as it could involve more tax being paid in the major European markets and less in Ireland and also inhibit our ability to attract foreign direct investment here.

The UK move “is part of an international trend to move away from the current corporate tax system towards one based more on sales,” according to Dr Brian Keegan, director of tax at Chartered Accountants Ireland. European Union countries are debating the introducing of a digital sales tax, though some other countries as well as Ireland are urging caution on a unilateral move, arguing that it could disadvantage Europe.