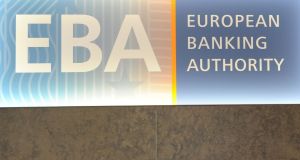 Another week and another defeat to the French. First it was the Rugby World Cup bid and yesterday it was our attempt to lure the European Banking Authority to Dublin from its current base in London. Paddy Smyth reports on how a bizarre spoiled vote saw the final decision made by drawing lot. Cantillon counts the cost to Ireland’s financial sector.

Seven staff members at Ryanair’s Irish operation have written to the airline seeking to negotiate new collective agreements on behalf of pilots in Ireland. The letter refers to the seven as the Ryanair Company Council in Ireland. The airline has repeatedly said it will not engage with the recently formed European Employee Representative Council or “any other group fronting for the pilot unions of competitor airlines”.

Irish investment group Tetrarch Capital is set to take full ownership of the Citywest Hotel in Saggart, Co Dublin, by buying out the interest of its joint-venture partner, Pimco. The pair acquired the hotel from receivership in 2014 for about €30 million and have since invested €12 million in upgrading the four-star property.

Staying with the property game, and the owners of Dún Laoghaire shopping centre have yet to confirm an anchor tenant for the property several months after completing a major multimillion euro internal renovation.

It seems the consultants are in at Independent News & Media (INM). The media firm has hired EY to help it chart a new corporate strategy, as the company seeks to move on following the acrimonious exit last month of its former chief executive, Robert Pitt.

As the mini-conference season for our main political parties ends, Bernice Harrison asks in the Media and Marketing column, whether brodcasting the leader speeches at primetime is really an essential public service or merely throwback TV.

Finally, in Your Money, Fiona Reddan explains why Ireland is no country for working women, while Prionsias O’Mahony identifies six stock market lessons for Donald Trump.