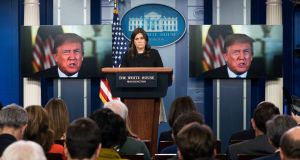 US president Donald Trump is expected to attend the World Economic Forum at Davos, Switzerland, in the coming weeks, an administration official said Tuesday.

In a statement, Sarah Huckabee Sanders, the White House press secretary, said the president was looking forward to attending the gathering of world leaders and business executives.

Mr Trump’s planned appearance at an event that is synonymous with wealth and elite prestige comes as he enters the second year of a term he won on a message of economic populism.

Presidents have rarely attended the forum in Davos, in part out of a concern that it would send the wrong message to be rubbing shoulders with some of the world’s richest individuals. -New York Times