There should be no time for anything that could hurt recovery

Splintering of Dáil demands clear-headed assessment of what happens next 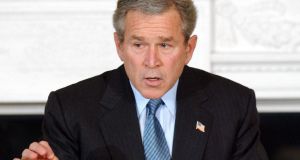 President George W Bush: “I earned capital in the campaign, political capital, and now I intend to spend it.” Photograph: Ron Sachs-Pool/Getty Images

Remember this? “I earned capital in the campaign, political capital, and now I intend to spend it,” said George W Bush after his re-election to the US presidency in 2004. No matter what happens here in the coming weeks, it is quite clear that the next government will take office with particularly low reserves of political capital and little enough to spend.

This will be the case if Fine Gael, still the largest Dáil party, takes command in a minority administration. It will also be the case if the party enters a dubious coalition with old enemies in Fianna Fáil. In either eventuality, the government would set forth from a point of considerable frailty, with severe constraint on any leeway for political manoeuvre.

The odds point to another election next year – and even that assumes agreement on a budget for 2017 to prevent the edifice crashing down in the autumn.

At issue at a deeper level for the next administration is whether political capital can be “earned”, as Bush would have it, in the time available to it. No matter when the country goes to the polls again, this may well determine its fate.

Fine Gael’s campaign misfired badly from the off, having conflated an especially hard-won recovery in economic growth – embracing steady job-creation – with recovery in the national mood.

For all the swagger about the eventual elimination of the universal social charge (USC), the notion did not gain traction. No one relishes tax, but the result points to scepticism about the viability of the USC pledge. Anecdotal evidence suggests people in the here and now are rather more concerned about homeless families trying to raise children in hotel rooms and chaotic dysfunction in the health service.

The water fiasco is another matter, so too the mortgage arrears debacle. The situation now is practically a complete reversal of the circumstances in which Fine Gael and Labour took office five years ago. Then they had huge political capital but no economic capital.

What followed is no mystery. Progress to exit the crisis was made at the expense of social capital, taxpayers’ capital and the Coalition’s political capital. Thus the limited economic capital now available to the State was not sufficient to avert a severe electoral rebuke to Fine Gael or to recuperate Labour.

In its wake, the poll leaves a fractured mess. Fianna Fáil is back. Sinn Féin is up, but not as much as it hoped. Independents and the Anti-Austerity Alliance are up. Social Democrats held steady. The Greens won a couple of seats.

As haggling begins with an emboldened opposition, the splintering of the Dáil demands a clear-headed assessment of what happens next. On all sides, a little humility would go a long way. There is no overwhelming mandate to implement the manifesto of any party.

Given the severity of pressure on the Dáil arithmetic, it would be unwise and wasteful to concentrate on plans for execution three, four or five years hence. Inevitably, the focus will be the short or medium-term. The need for demonstrable progress on housing and on initiatives to cut public expenditure on drugs is urgent, and a lot more so than long-dated tax promises.

Serious challenges abound on all fronts, but running a government is not a hobby. Policy and action are required, not foggy platitudes. And money is tight.

The binding principle must still be to preserve the emergent capacity of the State to act in respect of spending or taxation. True, the election result suggests the turnaround in the public finances left voters cold. Yet there should be no truck with anything that would impair that progress.

This is crucial for market confidence in the State’s large debt, which, in turn, determines whether the €7 billion a year bill for interest payments goes up or down. It is only by rigorous control over the public finances that resources are freed to tackle the many problems that rightly rankle with voters. To insinuate otherwise is to exercise deceit.

This is as important for Fine Gael’s remaining political capital as it is now for Fianna Fáil. The latter’s credentials as a daunting electoral force may have been re-established but its economic credentials have not.

Be it from the outside looking in at a minority government or within the Cabinet chamber, Dáil numbers and Fianna Fáil’s insuperable lapses pre-crash mean it cannot repudiate its new-found responsibilities on the budgetary front.