The problem isn’t all about water, so the cure won’t be either

Opinion: ‘The Government will hope to pick off many of the things driving the protesters through a variety of changes’ 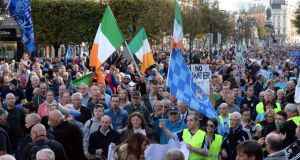 ‘Can the Government get through the current anti-water “noise” and anger?’ Above, a recent anti-water charges march, in O’Connell Street, Dublin. Photograph: Eric Luke / The Irish Times

It seems near impossible in the current political environment to have a logical debate about pretty much anything to do with taxes or charges, or even the economy in general. So goodness knows what the reaction will be to the Government’s big water plan next week.

A debate, once started, now seems to head inevitably into one of a number of predictable cul de sacs. These include: “We wouldn’t have to do it (whatever it is) if we had burned the bondholders”; “Hard-pressed homeowners can’t afford to give any more”; “You have to listen to the people”;” and various catch-phrases involving the squeezed middle.

Of course all these have some truth to them. Households are squeezed. There are groups of the population who remain under relentless financial pressure. And the public in general is simply not feeling in its pocket the recovery which the Government and business leaders are constantly promoting.

So whatever way the debate goes next week, it will be about water, but it will also be about much more. Consider the maths. We have all paid heavily since the crisis broke in 2008: €1,500 extra a year for a single lower income employee in taxes on income and over €5,000 a year for a higher income couple; around €1,000 in annual property tax on a €500,000 dwelling; €450 a year extra on average for those still paying health insurance; €400 extra for your annual train commuter ticket in Dublin. And on, and on. So all this is not about a water bill which will cost a family a net, say, €200.

The protests have been a chance to hit out at the cumulative impact of all the impositions. Perhaps, as one observer said to me last week, people feel that now the economic situation is stable enough – their jobs are safe, the euro won’t disappear – that protest is possible. There was a lot of ranting in the Russell Brand video, but he was right on one thing – households feel they are being caught yet again, while the revelations on bonuses and consultants’ at Irish Water are seen as symptomatic of a cadre which are still cashing in.

By responding next week with a revised water plan, the Government will reach into the phrase book de jour and say it is “listening to the people”. This could also be called leading from behind. I suspect its strategy will be to ride out the initial “we won’t pay a cent more” storm and hope to win over the middle ground.

To what extent this middle ground exists is, of course, an interesting question; right across Europe political support has ebbed away from the centre and headed right and left. But the first job for the Government here is to start fixing the water problem – it will restructure Irish Water, change the charging mechanism and try to persuade people that it is all fixed. No easy task.

As well as political capital there is a lot of real capital tied up in this. The Government has invested €250 million in equity in Irish Water and underwritten €350 million in borrowings. Add in the mess to the budget figures which unravelling the whole thing would create and you understand why the Government is trying to fix what is there, rather than tearing it all up and starting again.

Can they win the water war? Opposition to the charges comes from a disparate group, ranging from those who will never pay, to those who are worried about privatisation, to those worried about the cost, to those who oppose everything. The Government will hope to pick off many of the various things driving the protesters through a variety of changes. Above all, it will argue that it won’t cost too much.

But can it get through the current anti-water “noise” and anger? It will be interesting to watch. I suspect that to do so – or perhaps more accurately to start to move beyond the huge political damage it has caused it – the Government needs to start selling a wider message of where it sees its whole policy on tax and spending heading next. The problem isn’t all about water, so the cure won’t be either.

The Government has still to answer the question of “where next after the troika?” in a convincing way. It must carry a lot of the blame for the extent of voter anger itself – not only because it messed up the water issue, but also because ministers have sent out the message that all is fine, for example building up unrealistic expectations for Budget day. It has simply not tapped into the fact that households are hearing about recovery, but most are still not feeling it. This has left a gap into which those leading the water protests have jumped.

The emergency period of major budget cuts are over, but there are still big choices to be made about where to raise tax and how to spend money. The Government seems loath to address this future agenda and retreats to hints of more tax cuts to come and, sure maybe we might afford a hike in public sector wages before long, too.

The irony, of course, is that the economy is picking up and international confidence in Ireland is holding. This should give the space for a debate on the serious economic issues we still face and how to deal with things like water. Instead, all we are seeing is crisis management and what should be an economic debate reduced to one of trite clichés, free water and easy choices.