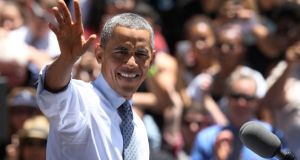 President Barack Obama’s singling out of Ireland in his attack on US companies relocating their legal addresses for tax purposes overseas has brought yet more negative focus on the Irish low-tax regime so favoured by big US corporations.

Fourteen months after Ireland was branded a “tax haven” at a Senate hearing over Apple’s exploiting of a loophole to keep tens of billions of dollars out of the hands of the US tax office, Obama accused big US firms on Thursday of “gaming the system” by “magically” becoming Irish companies simply by buying a small company in Ireland.

The Obama administration along with Democrats and Republicans in Congress have become increasingly alarmed at the number of so-called “corporate inversions”, where US companies have reincorporated overseas to reduce their tax bills and avoid paying corporation taxes at the US rate of 35 per cent.

Ireland is a popular domicile because of the 12.5 per cent tax rate but it is not alone. The UK, the Netherlands and Switzerland have also hosted US inversions in recent years.

At a two-hour Senate committee hearing on inversions on Tuesday, Ireland was mentioned once, though Irish inversions featured prominently. Up to 25 US companies are said to be looking at copying deals such as the inversion by Minnesota-based Medtronic in the $42.9 billion (€31 billion) takeover of Dublin medical device maker Covidien.

Without naming any companies, Obama told an audience in Los Angeles there was a small but growing group of big corporations that were “fleeing the country to get out of paying taxes”.

In an extraordinarily strong attack on “unpatriotic” corporate behaviour, he said the firms wanted to take advantage of operating in the US but didn’t want to pay for it, saying that some had labelled these companies “corporate deserters”. In a follow-up interview, the president tied Ireland into these acts of American corporate treachery.

Obama’s public comments on the corporate use of Ireland reflect similar views he has expressed in closed meetings. “He says it in private with a level of pique that’s unusual,” said one Washington political insider who has heard him complain about offshoring to Ireland.

He may not like what’s happening overseas but the president’s problem lies at home. The US corporate tax rate is among the highest in the developed world and US firms move their tax domicile overseas because they are taxed at this rate on global income.

One proposal in Congress, which Obama supports, would change the foreign ownership threshold for inversions from 20 per cent to 50 per cent and force firms to show they will retain close links with the US.

Democrats and Republicans differ on the details, in particular on making the change retroactive to May to block some inversions already announced.

With political agreement almost impossible to reach these days in a venomous Washington, don’t be surprised to hear Obama use his bully pulpit again to attack anti-American corporate practices involving Ireland.