Tax reform: TDs told Ireland has more to fear from EU than Trump 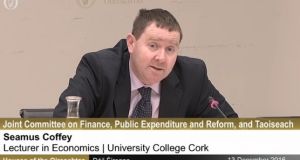 Seamus Coffey: “It is hard to imagine any reform – even unilateral US tax reform – posing a greater threat to the huge gains from Ireland’s most successful economic policy than the CCCTB.”

The introduction of a common consolidated corporate tax base (CCCTB) across Europe poses a greater threat to the Irish economy than any possible reform measures that US president-elect Donald Trump may bring forward, a leading academic has said.

Appearing before the Joint Committee on Finance, Public Expenditure and Reform on Tuesday to discuss new European Union proposals for a common base, Seamus Coffey said that as 80 per cent of Ireland’s corporation tax is paid by multinationals, this tax base would clearly be under threat under the EU proposals.

Mr Coffey, a lecturer in economics at UCC, who in October was appointed to review the State’s tax code after the recent EU Apple ruling, said Ireland’s tax base for domestic companies could also be affected if firms sought to avail of a narrower base and/or lower rates.

Given the large amount of tax that comes from exporters, he said, it was not “unduly pessimistic that Ireland could lose up to 50 per cent of our current corporation tax base if the CCCTB is to be introduced”.

Mr Coffey said there would also likely be further knock-on consequences as companies reacted to the introduction of such a system.

US companies in Ireland currently pay some €3 billion in corporation tax per annum. However, he noted that the overall contribution from multinationals was about €15 billion a year once salary costs, fixed capital investment and purchases of goods and services from Irish suppliers were taken into account.

“There is no doubt that the system of taxing transnational companies has not kept pace with the modern economy and is in need of reform,” he said. “However, it is hard to imagine any reform – even unilateral US tax reform – posing a greater threat to the huge gains from Ireland’s most successful economic policy than the CCCTB.”

Although proposals for a common tax base have been floated for the past decade and a half, plans to standardise the way taxable profits are calculated have intensified recently.

Ireland is against the proposals amid concerns it could make it more difficult for multinationals to take advantage of the country’s low 12.5 per cent corporation tax rate.

An ESRI study published earlier this month predicted that the introduction of a CCCTB could wipe 1.5 per cent off Irish economic output. It forecast that the flow of foreign investment into the State would decline by about 5 per cent, while Irish corporation tax revenues would fall by about 5.5 per cent.

Mr Coffey told TDs and Senators that the introduction of a CCCTB “will not eliminate, and likely not even reduce, tax planning by companies.”

Also appearing before the joint committee was Cora O’Brien, policy director at the Irish Tax Institute. She said there were a number of troubling aspects to the EU’s latest proposals, including loss of control over policy matters.

“Countries need the flexibility to adapt their tax policy if problems arise or individual circumstances change,” said Ms O’Brien. “One of Ireland’s strengths is that we can adapt quickly to change when the need arises; this has served us well and is not something to surrender lightly.

“These proposals do not make sense from an economic, job creation or competitive perspective,” she added. “We cannot see the logic of their design for a small open economy like Ireland, or indeed other small countries.”

1 Citigroup warns that markets are out of step with reality
2 Should my mam wait for house prices to drop before buying?
3 US ‘hard seltzer’ drink White Claw launches in Ireland
4 Michael Smurfit: ‘I asked Trump to invite me to the White House for my 80th birthday’
5 Chris Johns: Past is another country when it comes to our post-pandemic future
6 ‘I’m so lucky to be in the Caribbean – a million miles from Derry Girls’
7 Donohoe told insurers they risked ‘irreparable damage’ to reputation
8 ‘The recovery needs to be a full-scale economic renewal’
9 Tobacco makers still trying to make a mint from Irish menthol market
10 If you injure yourself working from home, is your employer responsible?
Real news has value SUBSCRIBE