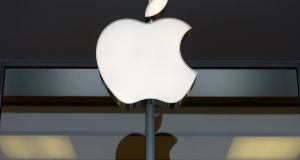 Apple is amongst the multinationals believed to have moved intellectual property to Ireland over the past couple of years. Such moves were a key factor behind the huge jump in Irish GDP in 2015.

The Government is to raise more money in the short term from the multinational sector by limiting the use of a key tax allowance related to the transfer of intellectual property to Ireland.

The move, recommended in a report for Government by economist Séamus Coffey, will mean that multinationals are able to write off investment in moving intellectual property (IP) assets such as copyrights, patents and trademarks to Ireland more slowly, raising an additional €150 million for the exchequer next year.

In future, capital allowances relating to investment in IP assets can only be claimed against a maximum of 80 per cent of the income arising from these assets during the year. Multinationals will still be able to write off the full cost over time, so additional revenue to the exchequer in early years will mean less later on.

The move is believed to have followed some consultation with major players, some of whom have transferred IP assets to Ireland in recent years. The Minister announced that the restriction would only apply to IP moved to Ireland from now on, meaning there will be no restriction on assets moved here in the past few years.

These moves have followed pressure on the big players to move these assets out of tax havens. The move of IP to Ireland was a key factor behind the huge jump in Irish GDP in 2015.

The Government also published a short paper on corporate tax, outlining the steps it had made in line with tax changes led by the OECD process on Base Erosion and Profit Sharing (BEPS) and changes led by the EU. It also announced a consultation process on changes recommended in the Coffey report, with a deadline of January 30th.

The publication of the document “points out to the naysayers the facts of what we’ve actually done on the OECD and EU agenda and gives certainty to the corporate sector on where we are going”, according to Feargal O’Rourke, managing partner of PwC.

Ireland is coming under pressure on its corporate tax regime from threatened EU changes and also the fall-out from the ruling that Apple owed Ireland €13 billion in back tax.

1 If tourists are such pariahs should we not be testing them on arrival?
2 ‘My rent here is so low it’s a joke’
3 WeWork on track for profits in 2021, says chairman
4 British pound sinking to ‘emerging market currency’ status
5 Belgium helps Ireland to a Brexit boon
6 Varadkar and Donohoe to meet banks to discuss mortgage breaks
7 Remote working: How to get ahead in a changed world
8 Irish Rail losses up slightly despite record passenger numbers
9 This charming man: how Paschal Donohoe won the Eurogroup presidency
10 The worst places in Ireland to invest in property
Real news has value SUBSCRIBE