Budget 2018: the missing measures that never made the speech 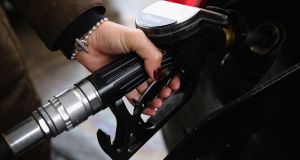 An increase in excise duty on diesel was just one of several measures that had been widely expected to feature in Budget 2018 but which ultimately got no mention. Photograph: Dan Kitwood/Getty Images

In a budget that was largely devoid of measures that had not been well flagged in advance, the only real surprise was perhaps in some hotly tipped measures that failed to feature at all.

Top of the list, perhaps, was the landmark merging of our PRSI and Universal Social Charge regimes.

While an original plan to abolish USC has been quietly dropped when confronted with the task in finding up to €4 billion in replacement tax revenue, the PRSI/USC merger was a central plank of the leadership campaign on Taoiseach Leo Varadkar.

Minister for Finance Paschal Donohoe went on record to signal his intention to merge the two charges into a single social insurance payment.

While few expected the detail of a new regime to be unveiled in the budget, given the complexity of the job, it was widely predicted that the Minister would at least signal his intention to proceed down the merger path. In the event, there was no mention of the reform plan in the speech.

Silence too on expected relief for landlords as an exodus from the sector feeds into rapidly rising rents in certain urban centres.

There had been talk of fast-tracking the amount of mortgage interest allowable as an expense against rental income. Property investors also entertained hopes of seeing local property tax (LPT) made an allowable expense.

Neither materialised, nor was there any alternative sop for the sector.

Other areas where change was widely anticipated included inheritance tax thresholds – especially for children inheriting from their parents – and DIRT were also remarkable by their absence.

The Help to Buy scheme had initially been earmarked for abolition, and later modification. By the time the Minister rose to present his budget statement, any reference to the first-time buyer incentive had been excised . The budget papers did, however, include a copy of the Government-commissioned Indecon report on the scheme which warned against its abolition.

Hopes among the environmental lobby for increased carbon taxes will have to wait for another day, as the Minister contented himself with a review by his officials with the promise to return to the topic next year.

Still with the environment, expectation of an increase in excise duty on diesel was fuelled by a report by Department officials for the Tax Strategy Group back in August. With diesel no longer seen as a “green” alternative following Dieselgate and the Government looking at options for raising tax revenues, it had been widely assumed that any relief on electric vehicles would be offset by a diesel excise increase.

But it became clear in the days running up to the budget that no such increase would feature in the Minister’s speech.

The same is true of excise on alcohol. The drinks lobby appears to have succeeded in persuading the Minister that any increase in the drink prices would adversely impact the tourism sector.

The challenge posed to UK visitor numbers from the looming prospect of Brexit and the ongoing weakness of sterling also sufficed to encourage the Minister to announce in his speech that there would be no change in the preferential VAT rate of 9 per cent applying to the tourism and services sectors despite hotel room prices approaching record highs.

Betting tax was another area that came under review in the Tax Strategy Papers, with some support from Independent Alliance members. The prospect of job losses in the sector seems to have persuaded Mr Donohoe to leave well enough alone - at least once he had settle don a substantial revenue raising increase in stamp duty on commercial property transactions.

Of course, the full detail of the budget will only become clear with the publication of the Finance Bill next week. It remains open to the Minister to add some of the missing measures to the legislation that will formally enact his budgetary measures.