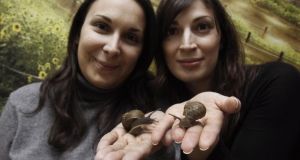 As they crawled over each other inside the red netted bags into which they had been packed, into crates intended for export, the 250,000 molluscs in the cold store collectively produced a remarkable “mucousy” sound that managed to rise above the more recognisable mechanical hum of the refrigerators.

Although these one-year-old snails couldn’t know it, they won’t be served up on Spanish, Italian and French plates any time soon, thanks to the sluggish conditions in the Greek economy caused by the imposition of capital controls earlier this week.

“Since we set up eight years ago, our company has shipped orders abroad at least once a week, dispatching crates of live snails on Friday that were ordered by the previous Monday. But this week, due to the situation, we won’t have exports, the first time in all these years,” says Maria Vlachou, as she looks at the three tonnes of snails in the warehouse of Fereikos, an organic snail farming company she runs in Ancient Corinth with her sister Penny.

Greece’s banks have been shut for normal business since Monday, only opening to allow pensioners with deposit books access their pensions. At ATMs, cardholders can only withdraw a maximum of €60 a day.

While there are no restrictions on exports or on Greek banks receiving money from abroad, the sisters say some of their foreign customers have come up with a variety of excuses not to pay debts or the required 50 per cent down payment on orders before shipping. Others have simply cancelled their snails.

“We can export. We have selected the snails and they are ready to go. But due to the whole chaos, and this is chaos and not a situation, people are afraid.

“They just don’t know yet how this will all play out,” says Penny, who at 33 is two years younger than Maria.

Maria adds: “One client asked how he would pay us, whether his money would get lost or if he’d have to end up paying in drachmas. One client, who owes us €5,000 money, even asked ironically, ‘Why are you so worried? Even if I paid you, you wouldn’t be able to get it from the bank this week in any case.”

The difficulties the company is now facing with clients is not just another unwelcome obstacle that the crisis has thrown at them, feels Penny, who admits to being less optimistic than her sister. It’s even much worse because she believes the current government has brought Greece to where it is now.

“I’m not saying everything was better before this government, but at least it was clear. We knew there was a crisis, that we had to change some things and find new solutions. With the current situation we don’t even have to think about solutions because there are no solutions,” says Penny.

“Through our company, by selling products from Greece, we tried very hard to help Greece’s brand name, and now we are hearing stories and excuses about people being afraid to buy from Greece.”

Fearing a No outcome in Sunday’s referendum could lead Greece out of the euro zone and even the European Union, the sisters say they’ll be voting Yes, believing its better for them, the country and their business.

“I cannot imagine Greece without Europe or Europe without Greece,” says Maria, a polyglot who speaks nine languages and who worked for 10 years in Brussels.

It was during her time working abroad that the idea for the snail farm was hatched. When Maria told her sister over the phone one night that she had eaten a plate of a dozen snails costing €38 in a Swiss restaurant, Penny, who was at her grandmother’s house in rural Greece, remarked that she would make a fortune if she gathered snails from around the locality, where people usually cooked them in tomato sauce.

A year later, with some start-up capital from their father and a plot of land from their grandfather, the women began operations. Three years later, they were market leaders in Greece, reaping them numerous national and international awards.

They are proud that they kept Fereikos in Greece, unlike so many other Greek companies that relocated to neighbouring Balkan countries or Cyprus to avail of lower taxes and wages and less bureaucracy.

Apart from running its own snail farm, the company works with 182 snail farmers in Greece, Cyprus, Spain and Germany, providing them with start-up expertise and supplies as well as buying and marketing their production.

“Here we support 11 families,” says Maria, referring to the number of breadwinners working in the company’s headquarters. “But indirectly, more than 200 families across Greece depend on Fereikos for their livelihood.”

In 2014, Fereikos exported 87 per cent of its production, with Spain, Italy and France the main markets.

This year, that figure has increased to 93 per cent, mainly fuelled by more orders and a bigger market share.

Although many of her friends argue a return to the drachma, the pre-euro currency, is what’s needed to boost Greece’s exports, Maria is unconvinced, believing such a move would make Greece a “third world country”.

“If we vote No, we have no hope. If we vote Yes, at least we have a bit of hope, even though it’s not much. At the end of the day, you have to choose between the lesser of two evils.”