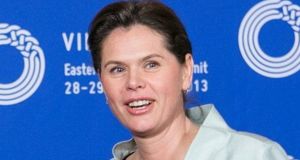 Euro zone finance ministers meet today in Brussels amid mounting fears about the Slovenian economy, and continuing difficulties with the Greek bailout as the troika once again postponed a visit of its full review team to Athens.


Potential sixth bailout
Ministers will be updated by the Slovenian finance minister on the financial situation of the former Yugoslav state, which is battling to avoid becoming the sixth euro zone country to seek a bailout.

The small country of two million people has been badly affected by falling exports, weak consumer spending and problem loans in its banking system. Results of stress tests on the country’s banks, which are predominantly state-owned, are due later this week.

While the government has pledged to inject €1.2 billion into its banking sector, it is expected that the banks will need about €5 billion. However, a senior eurogroup official stressed that euro zone officials believe such a figure “would be manageable” from Slovenia’s own resources.

The government of prime minister Alenka Bratusek, which has pledged to avoid seeking official help from EU and International Monetary Fund lenders, survived a confidence vote in the Slovenian parliament last month.

Meanwhile, a European Commission spokesman confirmed that talks between Greek officials and the troika of international lenders will now not fully resume until January, though a reduced team will travel to Athens on Wednesday to resume technical discussions, amid continuing disagreements about the scale of adjustments needed for the Greek programme.

While the Greek parliament passed its 2014 budget over the weekend, the eurogroup has yet to sign off on the latest instalment of Greece’s rescue package, amid disagreements over the scale of Greece’s fiscal gap for 2014.


Austerity intolerance
Greece’s international lenders believe the country may miss its budget surplus target by €2 billion unless it finds new savings. This figure is disputed by Athens, which is opposed to imposing further austerity on a country that has already undergone severe economic retrenchment.

Greece, which assumes the rotating presidency of the Council of the European Union in January, is approaching the end of its sixth year of recession. It has the highest unemployment rate in the euro zone, at over 27 per cent.

The European Commission forecasts the country’s debt to gross domestic product ratio will peak at 176 per cent this year. While the two Greek bailouts, worth about €240 billion, are due to end in a year’s time, there are concerns that the country may need further funds, amid reports of a funding gap of up to €10 billion in its rescue programme.