SF now accepts legal targets for debt must be met

Party takes as a given a Department of Finance forecast of 188,000 new jobs 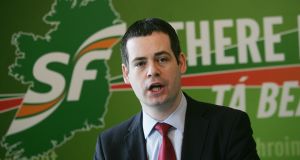 Sinn Féin’s manifesto marks something of a change of tack.

The party relentlessly opposed the painful post-crash austerity drive, and it campaigned loudly against Europe’s fiscal treaty in the 2012 referendum. Now it claims to comply with stringent budget rules laid down in that treaty, rules which will seriously curtail the next government’s room for manoeuvre.

It seems, therefore, that Sinn Féin accepts that legal targets vis-à-vis the continuous reduction of deficits and debts must first be met before any new money becomes available in any given year.

Doing that while delivering a huge expansion in government programmes is a very tall order indeed, but it’s the same for all parties. It’s still a shift for Sinn Féin, which is viewed with distrust in business circles and faces political attack for lacking economic credibility. It will still take a very long time to convince its most ardent critics.

The party takes as read the Department of Finance assessment that the opening net “fiscal space” for the next five years is €8.6 billion. Via a swathe of new taxes, including a 7 per cent levy on income above €100,000, Sinn Féin would add €1.71 billion per year to the €8.6 billion. Sinn Féin assumes another €366 million would come from public sector savings, never easy. Having pressed for a wealth tax on net assets years ago, however, Sinn Féin now pledges only to “examine” such a tax in government.

Sinn Féin would eliminate the local property tax and water charges. It would remove 277,000 workers earning less than €19,572 from the universal social charge but retain USC on other earnings.

It would introduce free GP care for 250,000 “or more” per year, and it would make prescription drugs “free for everyone”. Housing initiatives include the construction of 70,000 new social units.

These proposals, and more, assume that a Sinn Féin government takes in a good deal more revenue from taxpayers. In that sense Sinn Féin is a tax and spend party, prompting Fine Gael to declare its plan would detonate a “tax bomb” which would wreck growth. Fianna Fáil charged that the plan would scare off multinational investors.

Sinn Féin does not account for up to €1.5 billion in anticipated benefits from a loosening of EU budget targets.

In line with the Department of Finance, it assumes the starting “fiscal space” for 2017 is €500 million. To that it would add €289 million in a year-one yield from the 7 per cent levy on an individual’s income above €100,000. Further unspecified monies would be raised from charges such as a sugar tax on drinks.

The 1 per cent tax on betting would rise to 3 per cent. There would be a staggered reduction of private pension tax relief.

Business owners would pay a 15.75 per cent employers’ rate of PRSI on salary in excess of €100,000. The rates of capital acquisitions tax and capital gains tax on passive investment would rise.

The total anticipated yield is set out in the manifesto, but the yield from individual measures is not.

1 Belgium helps Ireland to a Brexit boon
2 ‘My rent here is so low it’s a joke’
3 Can Grafton Street stop the flood of closures?
4 New Powerscourt Springs hotel to open in defiance of virus gloom
5 This charming man: how Paschal Donohoe won the Eurogroup presidency
6 Goodbody loses a second suitor as Bank of China deal falls through
7 AIB to compensate another 1,100 tracker mortgage holders
8 Why gift a son now if it eats into his tax-free inheritance threshold?
9 Big Four told to outline plans for audit split in UK by October
10 Holiday home rental company exits Irish market
Real news has value SUBSCRIBE