Seven out of 10 consumers are positive about their finances, survey finds 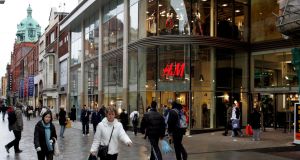 Most consumers plan to save cash this year with an eye on both retirement and rainy days in the future, a survey published on Monday shows.

The Bank of Ireland Economic Pulse, which tracks business and consumer sentiment every month, indicates that most households and employers are positive about the near future.

The survey shows that seven out of 10 consumers are positive about their financial situations and that 70 per cent are likely to save some money over the coming year.

Being prepared for a rainy day and providing for a pension topped the list of reasons for putting money aside, the survey says.

“Households were more upbeat about their own finances this month,” she said. “But with the focus of the Brexit talks turning to the transition period and indications of substantive differences between the UK and the EU on elements of this, they sounded a more cautious note on the outlook for the economy.”

Fewer households than in January feel that this is a good time to buy big-ticket items, but the survey suggests that sentiment on this front softened once the post-Christmas sales ended.

Rising house prices and rents are worrying up to four in 10 Irish households, the survey shows, while many businesses say that accommodation in their regions is inadequate.

“Housing infrastructure impacts on the quality of life but also has a role to play in attracting staff, so it is relevant for firms as well as households,” said Dr O’Sullivan.

The overall Bank of Ireland Economic Pulse stood at 95.2 this month, an increase of 2.4 on January and 2.7 on its reading 12 months ago.

This indicates that sentiment about the economy has improved amongst both businesses and consumers.

Business across industry, services and retail plan to hire workers are upbeat about their prospects for the coming three months.

However, the survey shows that growing concerns about poor infrastructure, with the State water services, waste, energy and transport all coming under fire, particularly in Munster and Connacht/Ulster.

The lender’s regional pulse shows that many companies rate the housing, transport and telecoms infrastructures in their areas as inadequate.

Also, many businesses expect Brexit to have a negative impact over the next year.

The level of concern varied from region to region, but was highest, at 75 per cent in Connacht/Ulster and lowest at 62 per cent in Dublin.

Ipsos MRBI surveys 1,000 homes and more than 2,000 businesses on a range of topics, including the economy, their finances and spending, on Bank of Ireland’s behalf, for the economic pulse.