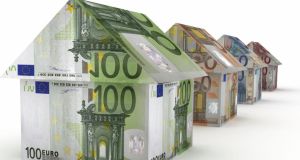 The median LTV ratio for Irish owner-occupier mortgage holders was found to be 72.9 per cent, nearly twice the euro zone equivalent

Once touted as the golden generation, those who joined the workforce as the Celtic Tiger began to roar in the late 1990s are now being written off as Ireland’s lost generation.

Saddled with debt, unable to trade up and hammered by a succession of new taxes and charges, they are perhaps the first generation to be materially worse off than their parents. Their plight was brought into sharp focus this week courtesy of a survey on household finance and consumption, collated by the Central Statistics Office and the Central Bank as part of a wider euro zone study.

One metric illustrated the so-called squeezed middle more than any other.

The median debt-to-income ratio – essentially a measure that compares the amount of debt you have to your gross income – was calculated to be 100.4 per cent for the State as a whole, relatively high by international standards. However, for those in the 35-44 age cohort, that ratio jumped to 204 per cent, compared to 72 per cent for those under 35, and just 14 per cent for those over 65. 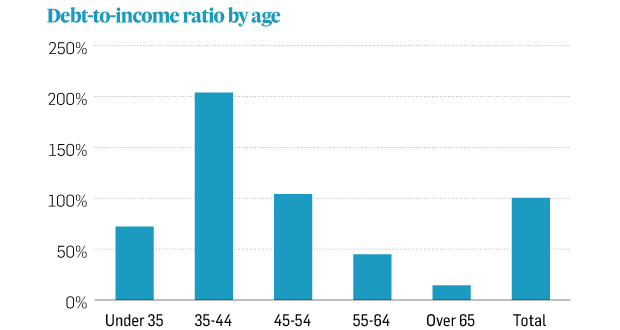 The same ratio for those households with three or fewer children was coincidentally also 204 per cent, compared to just 44.6 per cent for single adult households.

The Mid-East, encompassing the Dublin commuter belt counties of Kildare, Meath, Westmeath and Wicklow, had the highest debt-to-income ratio at 171 per cent, while Dublin had the lowest at 76 per cent.

These numbers capture a segment of society which has been skinned alive by the financial contraction.

This debt bulge inflects the State’s overall loan-to-value (LTV) ratio – the burden of debt carried by mortgage holders relative to the value of their properties. The median LTV ratio for Irish owner-occupier mortgage holders was found to be 72.9 per cent, nearly twice the euro zone equivalent and 20 points ahead of the next highest country, the Netherlands on 52.5 per cent.

Because the survey uses medians, as opposed to averages, we can infer that 50 per cent of this cohort have considerably worse debt ratios than 72.9 per cent, reflecting the high level of negative equity.

The survey was generated from data collected at the end of 2013. Since then, property prices have risen by 16.3 per cent nationally and by 23 per cent in the capital, benefiting those with poor LTVs.

However, the new Central Bank lending restrictions may put paid to this, as the measures are designed to act as a drag on prices.