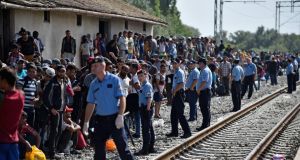 That the politics of Europe’s migration crisis are terrible is self-evident, but the question of economic impact also arises. That is the dismal task of a dismal science. Photograph: Jeff J Mitchell/Getty Images

It’s difficult to consider the economics of the ongoing crisis when police are firing tear gas and water cannon at migrants and refugees, or shamelessly throwing food at desperate crowds corralled into a warehouse.

Confronted with a historic influx of displaced people into Europe, the primary response is – and must be – humanitarian. That the politics are terrible is self-evident, but the question of economic impact also arises. That is the dismal task of a dismal science.

As the situation escalates, two observations are relevant. First, the quest for a political settlement overrides any concern about the economic dimension within EU countries such as Ireland. The budgetary implications right now are relatively modest, although they must still be confronted. At the same time, however, the downside risks from any failure to settle the matter could be a whole lot worse in economic terms. The permanent reinstatement of border controls, for example, would threaten the very fabric of the single market. That, in turn, could have very grave consequences.

Second, the stark fact remains that Europe at large has a huge long-term requirement for immigrants. Interviewed by Reuters the other day, European Central Bank vice-president Vitor Constâncio said Europe’s relentlessly ageing society was engaging in “demographic suicide” and needed immigrants to keep its workforce from shrinking further. Constâncio didn’t put a number on the requirement, but the Organisation for Economic Co-operation and Development has estimated that the European workforce will need as many as 50 million more people by 2060 to avoid stagnation.

In the heat of chaos over the current influx from Syria and elsewhere, it is quite a challenge to comprehend such figures. But they do illustrate the long-term outlook. It’s already a given that planning in a coherent way for immigration on that scale necessitates a step-change in thinking and policy around the assimilation of new communities into established ones. What the turmoil demonstrates, however, is that an exceedingly difficult political conundrum has the potential to turn toxic. Note, also, that this comes in the aftermath of a prolonged recession in which immigrants were hit particularly hard.

Growth is tepid at best in Europe, with high unemployment a serious drag on recovery. In terms of the immediate outlook, however, the prime anxiety is the failure of the ECB bond-buying scheme to inject real momentum in the economy. Ructions in China and ongoing Federal Reserve deliberations on an interest rate hike present further uncertainties.

In a note this week, rating agency Standard & Poor’s said the migrant surge was unlikely to weaken EU economies and budgets enough to lower sovereign ratings. It said the politics may matter most, which seems about right. Moreover, S&P said the present influx was unlikely to substantially lessen the challenges faced by an ageing Europe in the decades ahead.

“The biggest uncertainty that the refugee crisis poses for sovereign ratings relates to the ability of European institutions and governments to find co-operative solutions to what is effectively a continental challenge. In the recent past, speedy decision-making in the face of European crises has often proved elusive, which we believe can be detrimental to credit quality.”

For all the concern around the suspension of open borders in the European mainland and the potential to undermine the economic system that underpins the single currency, S&P sees bigger risks in the threat of xenophobia and populism if EU leaders get it wrong in the next phase of decision making.

“Such a development might shift the focus of incumbent governments toward containing the populist surge, and move it away from pushing ahead with budgetary and structural reforms.”

It’s clear that any such moves would undermine credit confidence in the countries in question. “Slowing down or even backtracking on policies conducive to achieving those dual goals could over time increase downward pressure on sovereign ratings.”

Although the economic fallout is negligible for now, all of this presents a truly daunting challenge.