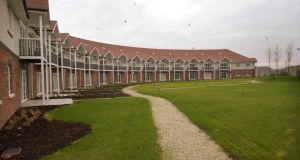 A survey from the Society of Chartered Surveyors predicts that average national house prices will be higher in 12 months time, with one in four saying they will be 10 per cent higher in Dublin. Photograph: Dara MacDonaill

Cash buyers accounted for little more than one in three purchases in the property market in the second quarter of 2014, down from 50 per cent the previous quarter.

The finding, which was made in the Society of Chartered Surveyors Ireland (SCSI’s) first Housing Market Report, would indicate that the level of cash transactions is beginning to moderate as mortgage availability is improving.

According to the report, which is based on a survey of property professionals across the country, the pace of sales activity levels in the property market (sales enquiries, sales agreed and sales completed) increased in the second quarter of the year. About 22 per cent of units covered in the report were purchased as buy to let or investment properties.

Simon Stokes, chair of the residential property group of the SCSI said that the increased sales activity levels identified in the report and the re-emergence of investors suggested an improvement in confidence in the property market. However he warned that the lack of supply, especially in Dublin, remained a key issue.

“Ninety per cent of respondents in Dublin believe there is a greater demand for housing than supply and 70 per cent believe that demand will continue to outstrip supply in Dublin in 12 months time. We urgently need more homes to be built and the Society recently called for a number of measures to increase the supply of new homes including a Builders Finance Fund to help small builders access development finance, a 2 year reduction in VAT on new homes to 5 per cent and a reduction in development contributions.”

With respect to prices, the survey shows that ninety per cent of respondents believe average national house prices will be higher in 12 months time, with one in three asserting that they will rise by 5 per cent. An even higher figure, 97 per cent, believe Dublin house prices will rise over the same period, one in four saying they will be 10 per cent higher.

1 Majority of employees don’t want to return to pre-Covid working patterns
2 Homeworking is depriving me of juicy gossip
3 Investors in Irish solar energy fund in line for €20m payout
4 Tobacco giant’s menthol-ban substitutes take 5% share of Irish market
5 Norwegian airline sued in Dublin by inflight caterer
6 If tourists are such pariahs should we not be testing them on arrival?
7 Varadkar and Donohoe to meet banks to discuss mortgage breaks
8 ‘My rent here is so low it’s a joke’
9 Construction activity rebounds as sites re-open
10 Goodbody’s planned €155m sale to Bank of China falls through
Real news has value SUBSCRIBE