Poland will line up against Ireland in Apple tax appeal 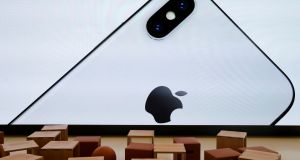 The move may be an attempt by Poland to curry favour with the European Commission. Photograph: Elijah Nouvelage/File Photo/Reuters

Poland will side against Ireland in the court appeal against the ruling that Apple owes the State €13 billion in taxes and that Ireland effectively engaged in state aid to the benefit of the American tech giant.

Poland has sought permission to make representations in support of the European Commission in the court case, according to Department of Finance briefing notes obtained under the Freedom of Information Act.

Poland is the only country to indicate it will make a representation in court against Ireland. In August 2016 the commission ruled that an Irish tax arrangement with Apple amounted to state aid, and that the US multinational must repay Ireland €13 billion in back tax.

Luxembourg has requested to intervene in support of Ireland’s appeal to overturn the ruling in the General Court of the European Union.

Poland will make a written submission outlining its support of the commission’s case against Ireland to the court, and may be given the opportunity to speak at a hearing in the case. Ireland will be allowed to respond to any points raised by Poland. Any member state can request to make a representation to the EU court in a case.

The move may be an attempt by Poland to curry favour with the commission, which made a state-aid ruling against that country in August, according to one source in the Department of Finance.

The commission ruled that Poland overcompensated Autostrada Wielkopolska, a motorway operator, after a change in legislation on tolls in 2012. The ruling outlined the firm had to repay the Polish state €210 million.

Ireland and Apple have each lodged appeals against the ruling in their case to the General Court of the EU. Ireland and the multinational tech group have been engaging over their “similar though technically separate” legal appeals, department briefings state.

In total, €3.6 million has been paid out by the Irish State in fees since 2013 for work on the legal appeal and the recovery of the € 13 billion bill from Apple.

Irish legal firm William Fry has earned €899,488 for its work on the case since 2016, while PricewaterhouseCoopers has billed the State €595,400 for tax consultancy work.

Briefing notes on the cost of legal fees around the Apple ruling note that “as it is an important issue for the State, the case will continue to be appropriately resourced”.

Ireland is legally bound by the ruling to comply with the European Commission and retrieve the €13 billion in tax from Apple, although the sum will be held in a temporary escrow account pending the conclusion of the appeals process.