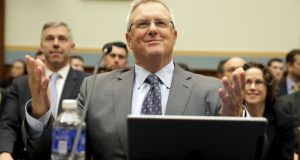 Image of the week: Apple v the FBI

The dispute between Apple and the FBI over whether the tech giant should help the federal agency unlock a terrorist’s iPhone reached Washington’s Capitol Hill this week, with representatives from both rocking up to be grilled by Congress. Apple’s general counsel, Bruce Sewell, throwing his hands up, didn’t appear fazed ahead of his testimony to a hearing titled The Encryption Tightrope: Balancing Americans’ Security and Privacy. The FBI conceded to Congress that a final court ruling on the case could be “potentially precedential” – in other words, a floodgate-opener for future co-operation. Or, as Sewell put it, “this is about the safety and security of every iPhone that is in use today”. (Photograph: Reuters / Joshua Roberts)

In Numbers: Colouring in

€322 million Sales of coloured pencils, crayons and markers arrived at this much for German company Staedtler in 2015, up 14 per cent thanks to the adult colouring-in craze. Manufacturers had thought the market was more mature.

55,000 Where Nielsen BookScan placed the first-week sales for Lost Ocean, the most recent title by Secret Garden and Enchanted Forest author/illustrator Johanna Basford.

The lexicon: Smombie Smombie is a portmanteau of smartphone and zombie. It’s a zombie with a smartphone, or a smartphone user who isn’t looking where they’re going, or paying attention to the real-life humans around them. The term for totally absorbed smartphone user is popular in Germany, where teenagers voted it the youth word or Jugendwort of 2015. Recently, “smombie” featured in a flurry of UK press headlines focusing on the fact that they’re a menace to other pedestrians: “Walkers hit by curse of the smombie,” declared the Sunday Times, while the London Evening Standard went with “Let’s be nice to the smombies.” (They know not what they do.)

Getting to know: Akbar Al Baker

When crazed Donald Trump suggested people of the Muslim religion should be banned from the US, the chief executive of Qatar Airways, Akbar Al Baker, was not upset. “Look, Donald is my friend, and we have been friends for a long time,” he told the New York Times, describing it an exercise to gain political mileage. This week the friend-of-Trump has been in Australia, where he introduced himself to media with the opening gambit, “I’m a very controversial figure in the aviation industry.” Of Qatar, he says his country his “very modern”, allowing women to mix with men. “You can swim in the same swimming pool. We have lady drivers.” Gosh. But it’s his message on flight safety that has won the most headlines of late. Runway overruns, he claimed after one of his aircraft did one on take-off from Miami, “happen very often”.

Sometimes when you Google things, the search engine throws in some cute gestures alongside the results. It’s the “you don’t have to be mad to work there, but it helps” division of Google HQ.

1 The loneliest number Google has done the maths on this one and will present you with the interface of a calculator with a solitary number: 1.

3 Bletchley Park Google the name of Britain’s second World War code-breaking site and the “encrypted” letters will decode before your very eyes.

4 Askew Type “askew” into the Google search bar and everything on screen tilts to the right just a little bit.

5 Anagram Search “anagram” and Google will jest: “Did you mean nag a ram?” No, ank youth.